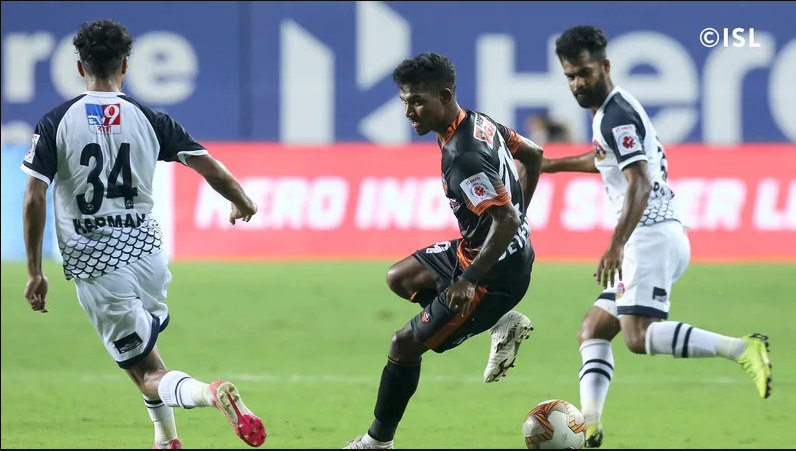 Goa, January 06: FC Goa failed to seize the opportunity to reduce the gap between third place and second place in the table after drawing the game with SC East Bengal. East Bengal forward Bright Enobakhare scored a brilliant solo goal in the 79th minute to give the 10-men team the lead but their joy was short lived as FC Goa forward Devendra Murgaonkar scored a header in the 81st minute to bring the teams back to level.

The first 45 minutes were eye catching and completely dominated by FC Goa as they produced 6 shots on target. The Gaurs kept majority of the possession and were producing long range shots at the goal. East Bengal goalkeeper, Debjit Mujumdar had to work hard to avoid conceding from distance. Debjit was continuously kept on his toes as the FC Goa players were threatening with crosses and long range shots. With the likes of Jorge Ortiz and Edu Bedia in the team, the Gaurs were on the ball at all times and looking to make counter attacking runs.

East Bengal came close in the 28th minute when a ball whipped in by Narayan Das was headed off target by Aaron Amadi-Holloway over the keepers head.

Both teams looked good going into the second half as the first half ended goal less.

FC Goa started attacking as soon as second half began. The East Bengal keeper was once again up to task. East Bengal faced a major blow when captain Daniel Fox committed to a challenge and ended up fouling Alexandre Jesuraj. The Englishman was given a direct red card and sent off for his brutal challenge on the midfielder.

The Gaurs looked to exploit the East Bengal side who were left vulnerable in the defense after coming down to 10 men. The number of attacks increased from FC Goa’s side. Much to Goa’s surprise, East Bengal did not sit back and defend. Multiple attacks from the Kolkata outfit saw them gain success when forward Bright Enobakhare made a brilliant solo run after picking up the ball in the midfield from a pass by Jacques Maghoma. He dribbled past 4 FC Goa players before faking a shot to send Mohammad Nawaaz the other way and finishing it in the bottom right corner of the goal. The goal is right up there with other goals as a goal of the season contender.

The East Bengal success was short lived when a cross whipped in from the left flank by Saviour Gama found the head of Devendra Murgaonkar. An easy header for the attacker as he was left wide open and none of the East Bengal defenders made an attempt to get their head to the ball, saw the ball end up at the back of the net.

In the end the match was left wide open for either team to win it as 6 additional minutes were introduced after the end of 90 minutes. East Bengal defended well to avoid another defeat and FC Goa will surely be disappointed to not get the three points which they should have sealed.