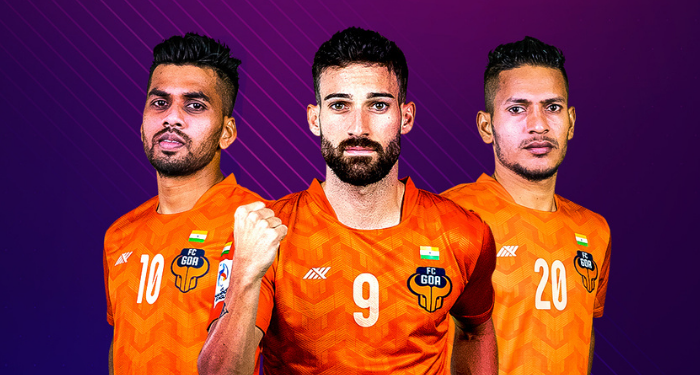 Goa, March 21, 2021: FC Goa have today launched new home and away kits for their upcoming historic voyage in the AFC Champions League in collaboration with the Club’s kit partners, SIX5SIX. The Gaurs will become the first-ever side from India to play in the group stages of the AFC Champions League when they start their campaign on April 14th against Al Rayyan.

Synonymous to the Gaur jerseys in recent times, orange remains emboldened on the home kit while the away kit is black. The jersey is also adorned with India elements including the tricolour, as the Club embarks on its landmark stint in the AFC Champions League, representing the dreams of over a billion people in the world’s most popular sport. The pattern and design are inspired by the Gaur – the symbol of the club and the pride of the state. Appealing to the young and old, the state animal of Goa is the symbol of strength and resilience.  It is infused with a new energy, derived from the Club’s pursuit to make a difference in Indian football and challenge the status quo.

The new FC Goa armour seeks to highlight the one constant about the Club – its insatiable thirst for innovation The Gaurs on the shirt also pay homage to fans of the beautiful game all over India as we together embark on a journey like never before.

Speaking on the new gear for the Gaurs, FC Goa COO Aditya Datta said, “This is a one-of-kind jersey for a momentous occasion – a huge step for Indian Football. This one is for FC Goa and Indian football fans – they are a special bunch of people and we wouldn’t have been here without everyone playing their parts. This is the culmination of the FC Goa and Indian football story – a club and a country whose passion for the sport has truly come to light in recent times.

“The jersey is one that celebrates football fans from all walks of life, giving a modern twist to the classics of Goa. It reflects the aspirations of a young footballing nation being represented at the highest level of club football in Asia by a vibrant young club and state.”

Speaking on the launch of the new kits, Ambar Aneja, CEO and Co-Founder of SIX5SIX also mentioned. “This is a special moment for Football in Goa and in India as a whole. We’re excited to create a unique identity for the team as they take on a monumental challenge. Unleash the Gaurs!”

The new limited-edition jerseys are priced at INR 999/- inclusive of all taxes. Fans can also get their jerseys customized with their own name and number at an additional cost. The jerseys will be available online at shop.fcgoa.in along with www.six5sixsport.com/fcgoa.