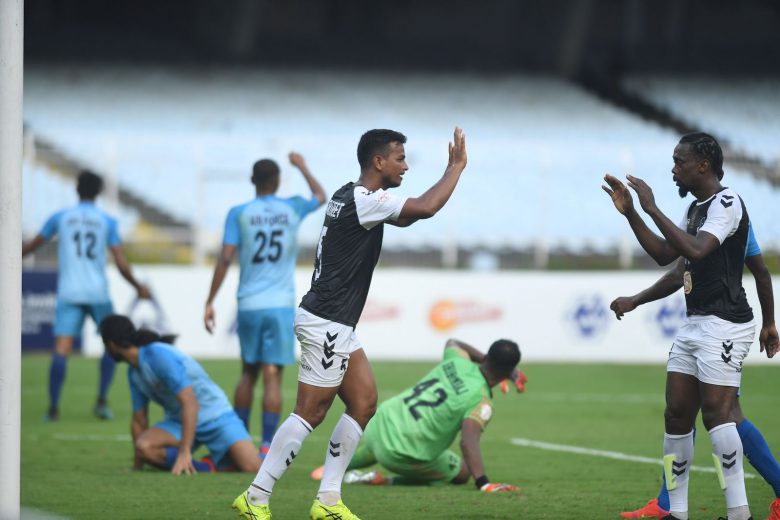 Prior to kick-off, both sets of players were greeted by the Honourable Chief Minister of West Bengal and Chief Guest of Honour for the Durand Cup opening ceremony, Ms.Mamata Banerjee.

Milan Singh broke the deadlock for Mohammedan in the 19th minute before centre-back Arijeet Singh doubled their lead in the 31st minute.AzharuddinMallick added a third at the stroke of half-time to give the Kolkata giants a three-goal cushion heading into the break.

IAF got a goal back in the 47th minute, thanks to a finely executed free-kick by substitute SauravSadhukhan which gave his side a glimmer of hope. All hopes were dashed away in the 77th minute when Marcus Joseph nicked a fourth goal for Mohammedan to rubberstamp the three points.

The local side and the first civilian club to win the Durand Cup in 1940 – Mohammedan SC are the only representatives of Kolkata football in this edition and they looked the dominant side from the word go.

In the 19th minute, Milan Singh’s speculative strike from distance left the IAF goalkeeper stranded toscore the first goal of the 130th Durand Cup. and break the deadlock in Mohammedan’s favour.

The Black Panthers added a second in the 31st minute, this time via Arijeet Singh who tapped in a lay-off by Sheikh Faiaz from close range. In the last minute of the half, AzharuddinMallick scored the third as the Black Panthers raced to a 3-0 lead going into half-time.

IAF, despite being three goals down, came back with an early goal which they nicked following the restart. In the 47th minute, substitute SauravSadhukhan, who replaced Ashok Kumar in the first half, scored from a free-kick from the edge of the 18-yard area down the left flank. Mohammedan custodian Zothanmawia seemingly had it covered, but was caught out by the dip and curl of the attempt.

Having cut down the deficit, there was hope in the IAF camp.

In the 71st minute, they had a long range attempt on goal from Mohammad Danish, which missed the target by a whisker.

All hopes however were crushed in the 77th minute, when the top-scorer and star of the 129th Durand Cup, Marcus Joseph, added a fourth goal for the local giants and made it game, set and match for the team in black and white.

“We are very happy to win our first match of such a historic tournament by such a margin. Disappointing second half, since we conceded a goal but I am happy with the overall performance. We have to make changes going forward since we are also participating in the Calcutta Football League”, said Mohammedan Head Coach AndreyChernyshev.

Man of the Match, Nikola Stojanovic said, “Very happy with the organisation of the tournament. I am very happy to play an important part today in the victory. I am loving my stay here. I am happy for the supporters, they have been supporting us from July since we started and the training has been good. We also have matches of the CFL going on, so we have to keep up our performances and ensure we do well in both tournaments.”