Conditions were heavy and we need to slow down to refresh the players: Igor Stimac 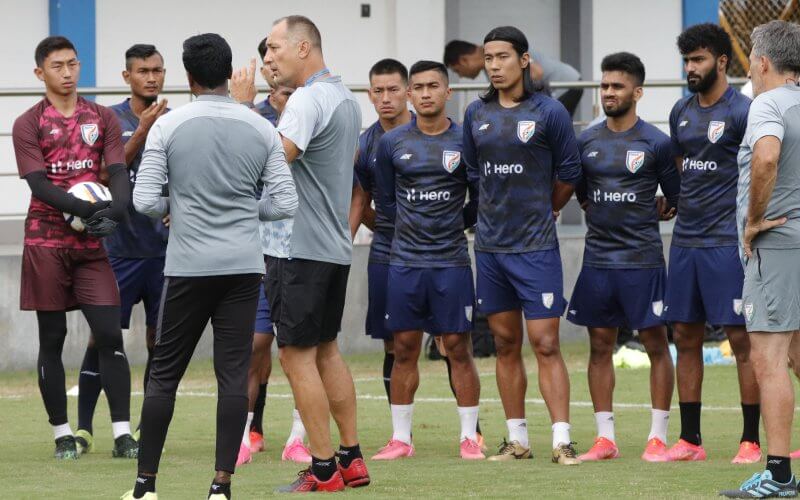 A day after Indian Men’s Senior National Team beat Hero I-League team Mohammedan Sporting in an exhibition match in the VYBK on Sunday (August 26) evening, Head Coach Igor Stimac maintained that “we need to be careful as we head to the next two matches.”

“We can’t expect much after 10 days of preparation. The legs are still heavy from the load, and we need to slow down, and refresh the players,” Stimac told www.the-aiff.com.

The Indian squad rode on a goal each from Farukh Choudhury and Ishan Pandita to win 2-0.

“I am happy with the manner our players performed. They should have scored a few goals much earlier. But it was not easy under the heavy downpour, and a heavy pitch,” Stimac explained.

It rained all throughout the match, and the downpour was heavy from midway in the second half.

“The conditions were challenging,” Stimac added. “The boys are all ready for 45 minutes, and we need to be careful going into the next two games against Nepal. We understand that the ATK Mohun Bagan and BFC players will be in better shape than others for two matches against Nepal.”

While the ATK Mohun Bagan players join the camp in Kolkata today, the BFC players will join the rest of the squad in New Delhi on 29th evening.

The Blue Tigers leave for Nepal the next day, i.e., August 30. The first International Friendly is slated for April 2, while the second one is on April 5.

A contingent of 23 players have been camping in Kolkata from August 15 onwards. The Blue Tigers had earlier played another exhibition match against a combined IFA XI which they had won by a solitary goal scored by Akash Mishra.