Blue Tigers settle down in Dubai under ‘the big umbrella’ 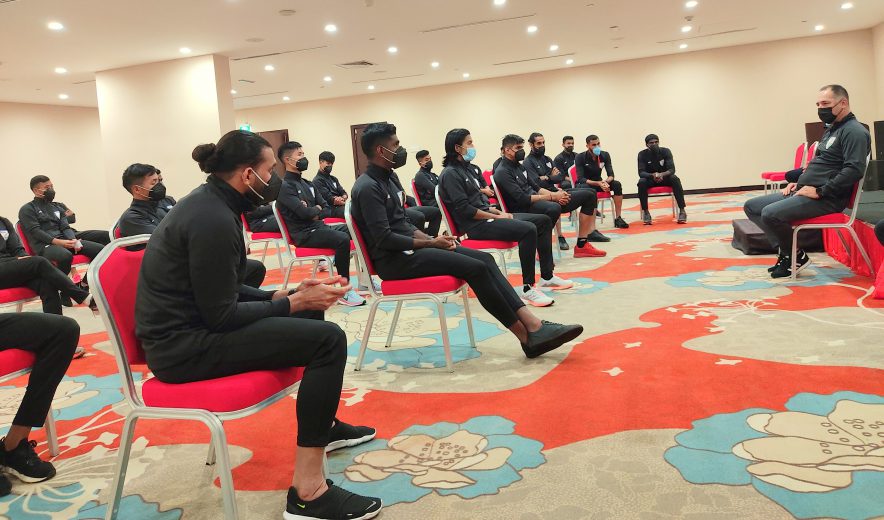 NEW DELHI: The 27-member Indian Senior National Team squad that landed in Dubai on Sunday (March 15, 2021) evening for the forthcoming International Friendlies against Oman (March 25) and UAE (March 29), has settled down, and the focus remains on the priorities ahead.

The entire squad had a meet with the coach late evening, and the first practice session is slated for Monday (March 16) evening. The squad also underwent the morning screening and aerobic sessions.

Midfielder Anirudh Thapa stated that everyone met with “great fondness”.

“It was great to see the coach after a long time as well. He congratulated us on our performances in the League, and insisted on carrying those performances forward for our upcoming Friendlies,” Thapa added.

Lalengmawia, adjudged the Emerging Player of the Hero Indian Super League 2020-21, mentioned that the coach “urged all to work hard, and with discipline”.

“The coach greeted us and made all the new players comfortable. He told us to work hard, and with much discipline. I am looking forward to the training sessions,” Lalengmawia, fondly referred to as Aupia, expressed.

“All my seniors were very welcoming and made us feel at home. They congratulated me on winning the HISL Emerging Player of the Year Award. But I know my real challenge lies ahead.”

The weather in Dubai has been pleasant and with a predicted maximum temperature of around 29 degrees and a minimum of around 21 degrees.

Akash Mishra, who has been a real sensation in the HISL said that the “coach made us aware of the significance of the forthcoming matches”.

“Stimac-sir urged everyone to work without any pressure. He made us so comfortable. But he asked us to focus on the job ahead,” Mishra maintained.

“It was so encouraging to get all the encouragement from my seniors like Sandesh Jhingan, Gurpreet Sandhu, Amrinder Singh, Adil Khan, Pritam Kotal and others. There are also many familiar faces for me here whom I met after a long time. It’s time to concentrate heavily on the task ahead.”

India play Oman on March 25 and UAE next on March 29. The Blue Tigers had last played an International fixture in November 2019 when they played in the FIFA World Cup Qatar 2022 Qualifiers.