All about ‘you and ourselves’, as Blue Tigers prepare for SAFF C’ship Final 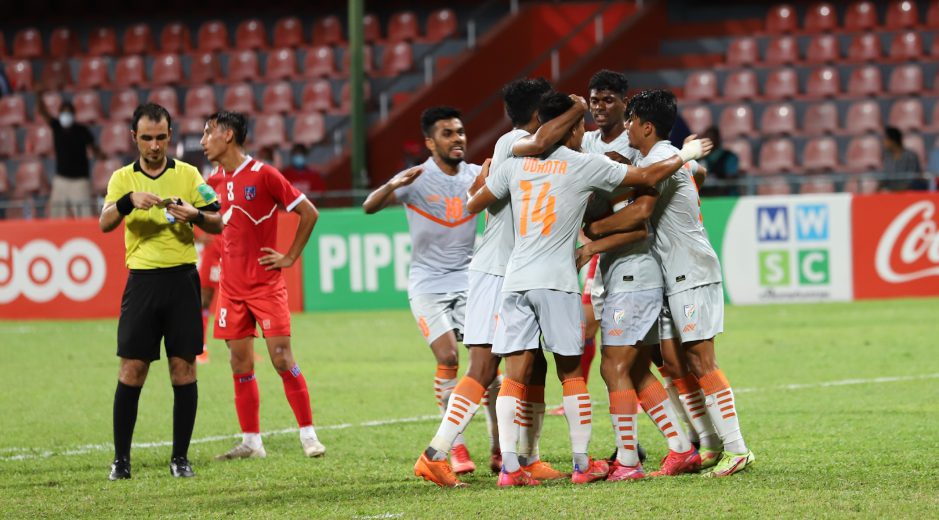 Two gestures post-match after the facile 3-1 victory against the Maldives in the SAFF Championship best describe the camaraderie in the Blue Tigers camp at the moment.

Moments after Sunil Chhetri was named the Man of the Match in India’s 3-1 victory over the Maldives in their last group league match in the SAFF Championship, he walked up to Lalengmawia and handed him over his Man of the Match Award – a snazzy watch. “This is yours. You deserve this more than me,” Sunil uttered, as Sunil’s gesture floored Lalengwamia.

And even before that happened, the entire contingent posed with a jersey of Farukh Choudhary saying in chorus “We love you, Farukh.” The Blue Tigers had also placed Farukh’s jersey no. 12 on the bench all throughout the match. And, Gurpreet Singh Sandhu even wore Farukh’s jersey at the post-match flash interview.

“This is for Farukh,” Gurpreet stated, pointing to Farukh’s jersey. “Unfortunately, he sustained a bad injury and he did have very valuable assists in the match against Nepal. It was extremely harsh that he had to go out. We want to dedicate it to Farukh and make it worth it.”

Striker Farukh had suffered an ACL injury in the match against Nepal, and that has ruled him out for the rest of the Championship.

The character on display against the Maldives was immense, that too in front of a packed stadium. Courtesy of the 3-1 victory, the Blue Tigers topped the round-robin format with eight points staying the sole unbeaten team in the process. They now meet Nepal in the final slated for October 16.

The mood, however, in the camp isn’t much willing to get into a celebration mode. The boys understand that nothing has been won as yet, and the next 90 minutes can always be extremely cruel. However, that didn’t stop them from celebrating Sunil’s brace, and his “amazing consistency”.

“He has been such an inspiration in Indian Football and it’s amazing how he continues to be at the top of his game so consistently. The manner in which he conducts himself on and off the pitch is so motivational for all of us,” Lalengmawia stated. “Whenever we get into a crucial game, he raises the bar and scores and makes it easier for all of us. “It’s a blessing we have him in the team – a real honor to be playing with him, training with him.”

Gurpreet Singh Sandhu added: “79 goals in 123 matches at the International level doesn’t come with luck. He deserves what he has achieved as he works extremely hard for all of that. He says he is going to do it, and does it on the field. What one can learn from him is his passion and determination. He has been doing his job, and in the end that’s what it all matters.”

Sunil’s striking partner upfront, Manvir Singh, who scored the opener against the Maldives mentioned: “I am very happy to have done my job. We are extremely motivated. We look forward to the final and need to recover in time for the final.” The contingent had their recovery session at the hotel premises and will travel to Male tomorrow (October 15) for their final training session ahead of the final.