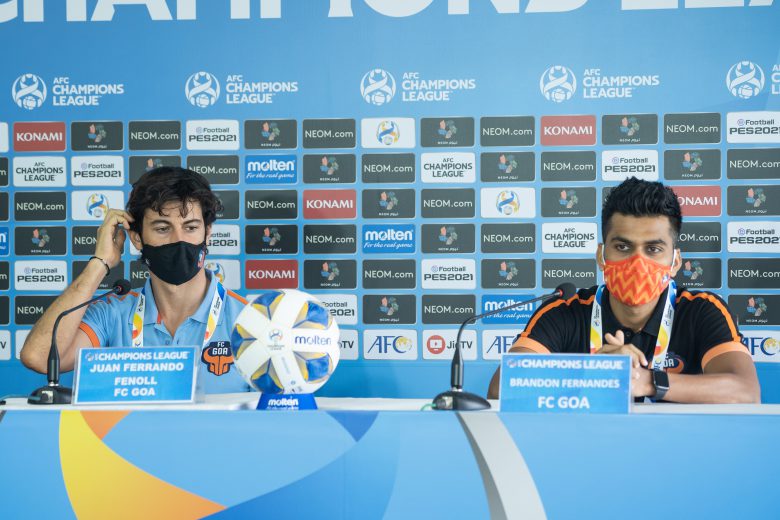 FC Goa face familiar opposition on Friday as they take on reigning AFC  Champions League West Zone champions, Persepolis FC for the second game in a row in their Group E clash. .

The Gaurs have been defiant thus far, drawing twice and narrowly losing out 1-2 to Friday’s opponents, which gives them a bit of hope heading into this crucial clash.

As the game inches closer, let’s take a look at how the two teams compare on this occasion, and where they stand in Group E.

The Men in Orange got off to the perfect start against Persepolis last time out, with captain Edu Bedia scoring early on, but that joy soon was short-lived as the Iranian champions fought back and scored twice within the first half an hour of the game.

However, the Gaurs did not concede again in the game, which certainly would give them much confidence as they step onto the pitch once more on Friday against the group leaders.

Head Coach Juan Ferrando has time and again stressed on the need for fitness as the games come thick and fast. And that is likely to play a big part in deciding the fortunes in this game.

“It can be tricky for all the teams to play six games in 20 days but it has not been that big of a problem for us,” said Coach Ferrando. “We need proper preparation after each matchday so that we can participate with the best possible condition.”

Juan Ferrando also revealed that Goa’s goalscorer from the previous game and captain Edu Bedia could be carrying an injury.

“Edu Bedia – our captain – is a big doubt tomorrow. He suffered a knock from the match. It’s nothing serious but we will find out soon. The physio and therapist are working hard to nurse him back to match fitness.”

As it is, the Spaniard will have to miss the game due to suspension after picking up his second yellow card of the group stages of the tournament in the last game. In his absence, the Coach may be forced to consider changing his shape and formation to combat the attacking threat of Persepolis FC, but will be glad to welcome back Alexander Romario Jesuraj from suspension.

Goa currently sit third in the Group E standings behind Persepolis and Al Wahda with two points from three games.

It has been the perfect start to life in the AFC Champions League 2021 for Persepolis, just as many had predicted.

Easily the favourites to progress, the team from Iran has a perfect record so far, playing three and winning three, grabbing nine points from a possible nine.

That puts them top of the Group E standings and well on course to top the group with a few games to spare.

Despite a 2-1 win over FC Goa last time out, Persepolis Head Coach Yahya Golmohammadi continues to be appreciative of the Gaurs’ effort and is taking nothing for granted.

“Before our game against Goa, everyone thought they were a weak side. But they’re not. They have shown good quality and are playing very well, coherently, with high intensity and with heart,” he said.

“We will try to focus well on defending free-kicks so that it is not seen as a weakness for Persepolis. The two goals we conceded from set-pieces were very rare and the fact that they happened twice may be a cause for concern. However, we need to address this issue with more practice and will remain focused.”

A fourth win for Persepolis in Group E could make qualification for the Round of 16 of the Champions League a mere formality.

Gaurs look to kick on in second half of competition

The AFC Champions League has introduced the Gaurs to a whole new level of competition where every moment and touch makes a difference. And for the most part, the Gaurs have risen to occasion to meet the challenge head on.

After a spirited display in the first half of the group stage, Juan Ferrando would look towards his men to learn their lessons and kick on from the gritty performances.