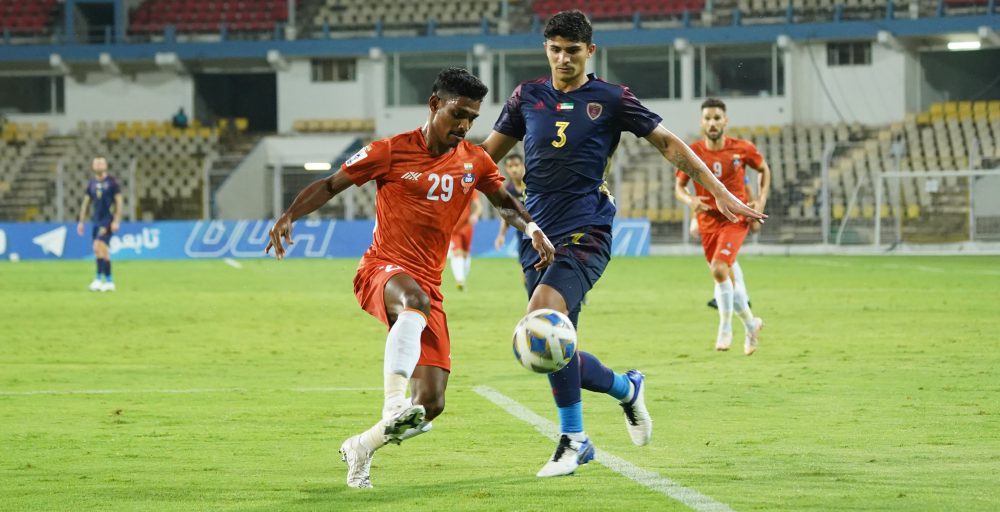 FC Goa impressed once again as they kept yet another clean sheet against Al Wahda in a 0-0 draw at the Fatorda Stadium.

A more open game than the tournament opener for Juan Ferrando’s men, the Men In Orange brought about a few moments of brilliance on both sides of the field to eke out the result. However, one would be forgiven to think that they deserved more with Brandon Fernandes hitting the upright and Devendra Murgaokar forcing the Al Wahda keeper into a fantastic save.

The Gaurs named an unchanged eleven from the side that started the first game of the tournament against Al Rayyan, hoping that a similar or better result could follow this time around too.

Once the game began, FC Goa threatened straight away, with Ishan Pandita making contact from a header following a cross from the left flank. His effort though wasn’t the precise one he was looking for. The early signs though were surely positive.

Al Wahda grew into the half, mounting their first big threat in the 23rd minute. Fares Juma headed a corner towards goal, but Dheeraj Singh comfortably held on as Goa absorbed the pressure. Jorge Ortiz fired one from distance five minutes later, but his shot was well over the bar and no trouble for Al Wahda.

The visitors did force a couple of more saves from Dheeraj before the end of the first half, first by Khalil Ibrahim  and then Tim Matavz taking aim from just inside the box only to see Dheeraj come out trump on both occasions to keep it even even-steven heading into the break.

In the second period, it was the Men in Orange who came out with more gusto, and had a golden opportunity to take the lead in the 54th minute of the match. The introduction of Devendra Murgaonkar from the bench made all the difference as his good work finally set up a shot for Brandon Fernandes, but the Goan’s fierce effort struck the post instead of nestling into the bottom corner.

It was a huge let-off for Al Wahda, who took the game to the Gaurs soon after, with Omar Khirbin seeing his header from point blank range saved by Dheeraj in the 66th minute.

FC Goa were in no mood to relent, however, as the impressive Devendra once again wreaked havoc inside the Emirati side’s penalty box, nearly making it 1-0 in the 73rd minute. A lovely ball in from Brandon down the right found the former Salgaocar man, but the effort from his outstretched leg was saved well by Al Wahda goalkeeper Mohamed Al Shamsi.

At the other end, Dheeraj’s heroics continued as he first saved a free kick from opposition captain Ismail Matar in the 78th minute, and then kept out two late efforts in stoppage time.

The young goalkeeper first saved brilliantly from Omar Khirbin in the 90th minute, and was helped out by Seriton Fernandes, who blocked the follow-up shot from Lee Myung-joo. Just four minutes later, Dheeraj punched the air in delight as he once again kept out a header from Omar right at the end, following a sloppy giveaway of possession.

In the end, FC Goa managed to hold on for yet another historic result, and can now boast of an unbeaten start to life in the AFC Champions League.

The Gaurs return to action in the Champions League on Tuesday, 20 April as they take on Iranian giants Persepolis at the Fatorda with kickoff scheduled for 10:30 PM.

Also Read: FC Goa vs AL Wahda: 5 key battles to watch out for

FC Goa vs AL Wahda: 5 key battles to watch out for
Juventus to establish three football academies in India!