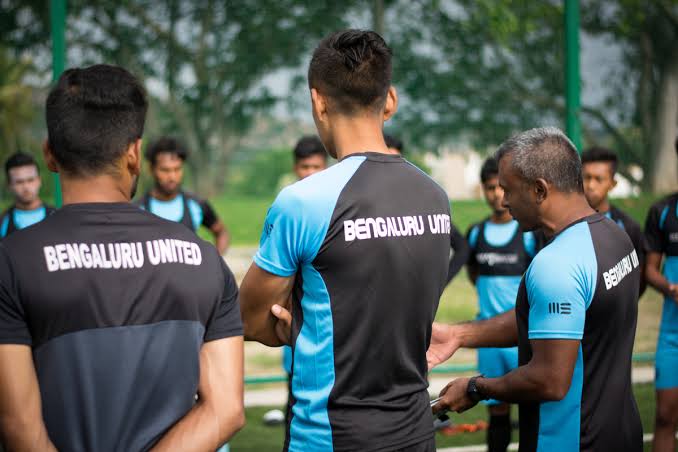 Richard had early stints as a footballer when he played for Indian Bank. Now, he is a UEFA ‘A’ license holder and was the Head of Player Development at All India Football Federation. He is currently coaching FC Bengaluru United, a club founded in 2018 competing in the I-League 2nd division and the BDFA League.

In a conversation with the FC Bengaluru United’s coach Mr Richard Hood, he shares about the pathway in youth development, fascination for coaching, his time at Bengaluru United and much more.

From youth development to coaching Bengaluru United, how do you perceive this shift?

A: Even before AIFF, I have been working in player development for 10 years. I started at Madras FC, then went to clubs like Chennai FC, Vasco Sports Club, TATA Football Academy and then Bengaluru FC. After this came my time with the AIFF, where I led the Player Development for them.

During my past experiences, I was surrounded by experienced people who coached at senior levels and I was closely working with them. Another boon happened when I attended a course in High Performance in 2017. It was a preparation for me to get into senior football coaching.

Well of course, the transition wasn’t easy. Doubts were all around because of my lack of experience with coaching, though I have been a part of football for a long time but not coaching in specific. So, there was a lot to do in convincing people and understanding the demands to coach at a senior level.

Now after 2 and a half years into my coaching career, the transition hasn’t been drastic or dramatic but it wasn’t easy also!

Now that you have spent so many years in player development, what according to you are the key aspects required for a coach to develop young Indian footballers?

A: I think the basics are patience and clarity. If you’re sure what you’re working towards and have clarity from the start of the season, it helps.

Then depending on the age group, you have to keep an eye out and focus on different aspects. It’s not easy or quick, it’s like a month-by-month or week-by-week process, where you’re guiding, managing and taking the responsibility to show them the right path ahead.

If you’re working for a club or academy, you play some part in developing them and shaping them so that’s why one needs to balance out between the whole comparative sides of this thing and as well as your main job is to produce players.

Now coming to your time with Bengaluru United, can you tell us what fascinated you to join this club?

A: When I met them, the club was just a year old. But they had a plan in place for the upcoming five years. That clicked, we’re together as a unit focusing on achieving them and I’m confident we will do well.

My candidature as a coach didn’t happen suddenly. We met a few times, understood what we will need from each other. Then a lot of ideas and philosophies were exchanged, about how I can contribute to the club. Also they were very clear how they wanted to build a future with me.

Can you tell us about the project in place with FCBU? Also, please share about the philosophy of your club.

A: The immediate goal is to promote ourselves to the I-League. Then talking about coaching philosophy and playing style, all that stays relevant as long as we deliver the comparative objectives of the club. With this job you can’t really think about 5 years in the future but you have to work like you’re working for the future also.

The goal and vision for the club is clear, to make the best out of what we have in terms of titles and championships. As I said, the immediate goal is to climb in the I-League and then look for a stable season and squad.

Where we play now, we don’t get that much game time really, and if we get into the I-League we will get at least 4 to 5 months and also 6 to 8 weeks of pre-season, which helps in improving the squad.

Can you tell us about the challenges and learnings you faced in the last season of the I-League 2nd division?

A: Well it was difficult due to the virus. There were challenges, like to put together a strong team as we had some players who were positive and it affected our starting XI initially.

That season was not much of a learning experience, because you don’t really know how to prepare for a 5-day tournament. Like, even historically we cannot go back and study because there was no such format which existed. So yes, we put our best foot forward, try to start the best team and produce results.

It helped us in some ways like after the tournament we understood the gaps we had, and since then we are altering them quite aggressively. So, I think just a general approach to the season based on what happened last season was very different and unusual.

What could be the realistic approach to develop the football scenario in Bengaluru? Can Bengaluru United play a role in it considering they now have international partners?

A: In terms of Bengaluru, yes FCBU will do their best to produce players and make the academy self-reliant, but we are just a part of the puzzle in what’s happening right now in Bengaluru because you’re talking about a city of 12 million people.

So, a lot will depend on our academy and the youth setup here. To produce players for us who can play regularly at the highest level and of course go on to contribute to the country.  I think the help which will come from Sevilla FC, we will see how we best utilise it after these lockdown restrictions are lifted. There will be a lot of exchange of ideas and views as to how it will benefit everyone from youth to senior team.

Right now, how we see football in Bengaluru we would love to have a lot more players from the region in the team and we are always open to discover the next best player coming from this region.

Tell us about the squad and what is the club doing to improve and support them?

A: The squad is still in the building phase. The club will disclose the entire squad soon in the future, but talking about the players who have been with us for a long time are Arun Kumar, who is a local boy, lives just opposite the football stadium. He has come up quite strongly, he also won the best midfielder award last year in the BDFA League. I worked with him 7-8 years ago when I was with the Bengaluru FC youth team, and seeing improve everyday makes me proud. This is a good example of how the club is encouraging local talent.

Then in terms of outstation and foreign players, we have to give a lot of credit to the system we have put, as recently Robert Primus who is from Trinidad and Tobago got a call for the national team after just playing the BDFA super division, so it’s good to know people are keeping an eye on us.

Overall, we have many players who came from loans so we guarantee that they leave as a better player from here. We try our best and give every player the best possible facilities and coaching so that they can improve and help us in future.

What are you personally focusing on improving the team?

A: The main thing we achieved is we are able to play with the style we wanted to. Gradually, the techniques and style is proving to be good for us as players are able to execute the game plan I’m coaching them. So, in recent seasons we were able to cover the points which we were losing earlier.

The major point is to be successful of course in what we are doing, we are getting close to the game model we hold here and get that success in holding this model. Given that the formats will be short and ruthless, you need to be ready for anything. You don’t know what the opponent will throw at you, so you need to be pragmatic as well, to let go of some things which belong to the original format. Just finding the balance and getting three points at the end of the day is the most important thing for me and the club. 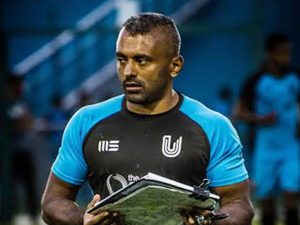 Richard looks forward to a successful campaign in the future, and to achieve every goal set by the club because he thinks the club has set a good reputation.  The facilities and lifestyle they give to the players is pretty much respectable and encouraging.

He also mentioned that FCBU is competitive in every way and for the young players with great talents, the platform which Bengaluru United provides like correct nutrition, training regime and game time is great to grow and come into the light.

Saviour Gama commits to FC Goa after signing a new three-year contract
We need to be brave and admit that we haven’t played to our potential, says Sandesh Jhingan