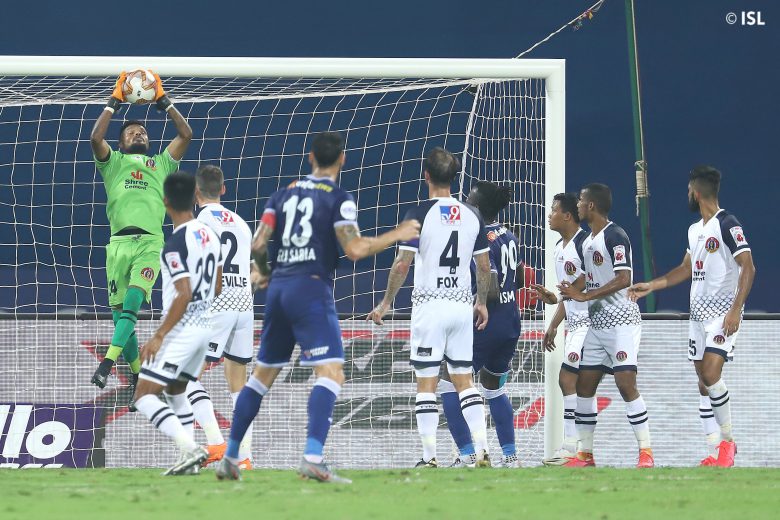 A spirited effort by the SC East Bengal defense led by goalkeeper Debjit Majumder helped the Kolkata side nullify a one-man advantage to Chennaiyin ending up with a vital point in the Hero Indian Super League at the GMC Stadium, Bambolim, on Monday.

Robbie Fowler’s side was forced to play with a man down for almost over an hour after Ajay Chettri received his marching orders at the half-hour mark. However, SCEB held their ground throughout the game to frustrate Chennaiyin.

SCEB made three changes as Anthony Pilkington was back in the side in place of Matti Steinmann. New signing Ajay Chhetri was also handed his first start while Surchandra Singh was the other change. Chennaiyin made just one change as Edwin Vanspaul had his second start of the season, coming in place of Fatkhulo Fatkhulloev.

The high-intensity game saw tackles flying early in the game. Ajay received the first yellow in the 22nd minute for his mistimed challenge on Anirudh Thapa.

Chennaiyin had the first chance in the 23rd minute when a Thapa free-kick into the box found Eli Sabia. The Brazilian crossed the ball into the area to an unmarked Enes Sipovic, who couldn’t get his header on target.

SCEB soon found themselves on the backfoot at the half-hour mark when Ajay received his second booking for a foul on Rahim Ali, reducing them to 10 men. This was the third time this season that Fowler’s side had received a red card.

Taking advantage of their numerical superiority, Chennaiyin pressed hard and nearly took the lead when Jerry Lalrinzuala played in Esmael Goncalves, who found Thapa in the box. The midfielder managed to roll the ball past the onrushing Debjit, but couldn’t direct his shot goalward. Narayan Das cleared the ball to safety before Rahim could get to it.

SCEB managed to keep their opponents at bay for the rest of the half, as the teams walked out even at the break.

Fowler’s team looked threatening after the restart and should have found the back of the net when Pilkington hit the side netting from a tight angle. Then, Debjit pulled off a stunning save to deny Isma from the edge of the box to keep the scores level. At the other end, the Chennaiyin defense was caught napping as a long free-kick saw Pilkington try his luck, but Vishal Kaith made a fine block.

SCEB were saved again by Debjit when the custodian cleared the ball in time, coming off the line to deny Rahim. He later showed good reflexes to get a strong hand to Lallianzuala Chhangte’s goal-bound shot.