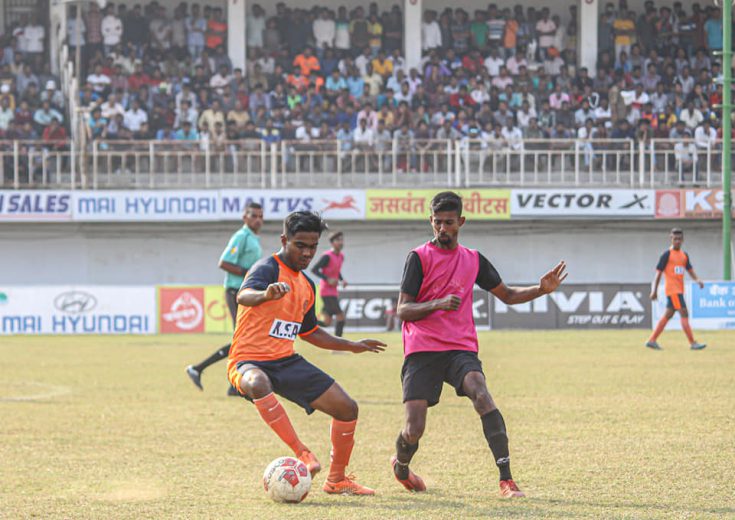 The opening encounter of the day saw an authoritative Mumbai outfit bury Parabhani after they netted 15 goals against the latter. Rishikesh and co-starred in the first half as Mumbai were up by seven goals at the end of the first half. Aman Gaikwad kicked off the proceedings with the opening goal at the 11th minute. Following him, Sanchit Singh netted the second goal. Rosenberg followed up with the third goal within two minutes. The fourth and fifth goal was scored by Rishikesh, at the 24th and the 26th minute. Rosenberg and Pawan scored the other two goals to crush Parbhani’s hopes at the end of the first half.

However, being up by seven goals, team Mumbai seemed discontent. They kept on maintaining their lethal attacks. The second half kicked off only to witness Mumbai strike eight more goals to take their scoring tally to an astounding fifteen goal lead. Rishikesh continued the conquest as he completed his hat-trick at the 42nd minute. He again netted two goals at the 54th and the 62nd. The rest of the five goals were scored by Brijal, Sanchit, and Kalpesh, in which Sanchit and Kalpesh netted a brace and Brijal scored one.

On the next encounter of the day, Nagpur clinched a comfortable victory against Nanded to qualify for the next round. Arikswamy gave an early lead to Nagpur at the 10th minute. Yash doubled the lead at the 24th minute. Both their goals kept Nagpur ahead at the first half. In the second half, Nagpur maintained their momentum and went on to score another goal through Sohrab’s effort at the 72nd minute.

Dhule district edged past Beed in the next fixture of the day. Devidas Sonawane starred with a brace for Dhule. He opened the scoring at the 10th minute and increased the lead at the 24th. His two goals happened to be enough for Dhule, as they maintained their defence and the scoreline to qualify for the next round.

Hosts Kolhapur outclassed Wardha in the next round. Rushikesh starred with a hat-trick in the first half. Prayin opened the scoresheet for Kolhapur at the 3rd minute. Following him, Rushikesh scored thrice at the 9th, 11th and the 16th minute. Kolhapur took a comprehensive four-goal lead at the end of the first half. The second half kicked off, only to increase the embarrassment for Wardha. Kolhapur added four goals to their tally to thump Wardha. Rushikesh scored his fourth goal at the 67th minute. The other three goals were netted by Rohit, Rahul and Kapil.

Pune played out a thrilling game against Aurangabad. An end to end affair saw Pune win the game on penalties. Both the sides created opportunities, which they failed to convert from. The scoreline remained goalless until the final blow of the whistle which headed the match to the penalty shootouts. Saraj, Choudhari, Shivam, and Sufiyan scored from the spot kicks for Pune. On the other hand, Aurangabad scored three goals through Amir, Khan Zaid, and Janeed’s efforts, and failed to capitalize from the other two opportunities.

Solapur played out a thrilling tie against Amravati in which the former edged past their opponents on the sudden deaths. Failing to score in the regulation time, the match went on to the penalties. Solapur took 7 attempts, in which Gaurav, Omkar, Shaunak, Ashwin, Nehul, and Saurav scored from the spot-kicks. Similarly, Chinmay, Pratyush, Prajwal, Sidhant, and Aniruddha scored for Aurangabad, falling short of a goal against their counterparts.