‘This is our chance to etch our name in history’ – ATK, Chennaiyin 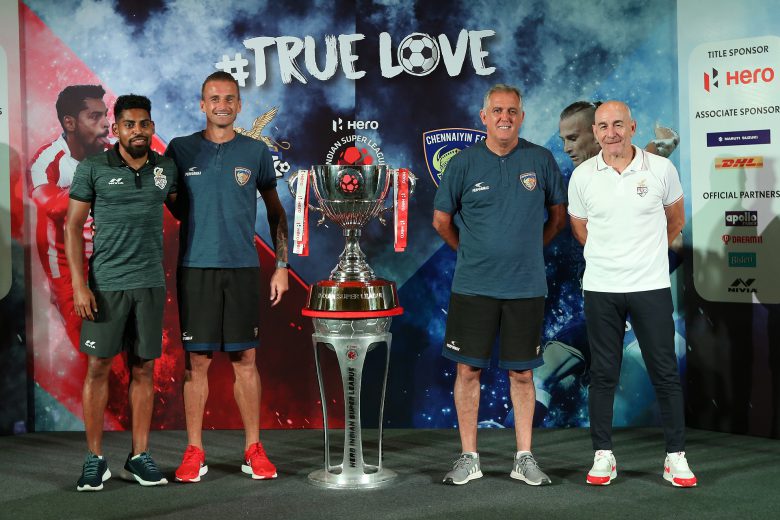 Season six of the Hero Indian Super League is all set to culminate with a showdown between ATK and Chennaiyin FC at the Jawaharlal Nehru stadium here on Saturday.

ATK and Chennaiyin have both won the ISL twice already and are looking to become the first side to win it three times. The two teams were brilliant in the play-offs with Chennaiyin FC getting the better of FC Goa in a thrilling two-legged tie that finished 6-5, while ATK produced a second leg turnaround to get the better of Bengaluru FC 3-2 on aggregate.

This is the first time that these two clubs are meeting each other in the final. Interestingly, neither club has lost an ISL final – a run that will end for one of them on Saturday.

While ATK have been one of the most consistent sides this season, Chennaiyin were left to produce a miracle to reach this stage after Owen Coyle took charge of them at the start of December. In the six matches before his arrival, Chennaiyin had won only one match and scored just four goals. Since he landed here, the former champions went on to win eight matches, a tally bettered only by FC Goa.

Now Coyle is one win away from completing a miracle. Key to this turnaround has been the form of Chennaiyin’s attack that has produced goals whenever necessary. Nerijus Valskis has 14 goals to his name and is fighting for the top scorer award, while Rafael Crivellaro is the creative engine of the team. The partnership between the two has blossomed under Coyle. Winger Lallianzuala Chhangte has also been brilliant and has scored in their last three games, becoming the first Indian to score in both the legs of a play-off tie.

“I have nothing but the utmost respect for ATK, for the quality of players they have. We will stick to our style because we believe that we can win games with it. We are still under pressure as we go into the final and we want to be because that’s when we are at our best. When this team is focused and concentrated, that’s when our quality kicks in,” said Coyle.

ATK, on the other hand, rely on Roy Krishna and David Williams’ contributions in attack. Krishna, with 15 goals this season, is also firmly in the race for the Golden Boot. But equally dangerous is Williams who scored a brace against Bengaluru in the play-off. While the likes of Edu Garcia and Javier Hernandez provide supply from the middle, wing-back Prabir Das is a crucial attacking outlet for the Kolkata-based side.

“We have to enjoy the final and try to win it. But we have to respect the opponent. We have 90 minutes and some more to compete for a win. There is only one final. Maybe some player doesn’t have the opportunity to play another final in his career. But we need one heart and the whole mind for the final,” said ATK coach Antonio Habas who led ATK to the title back in 2014.

Given the strength both sides have in attack and their tendency to chase a game to the death, one can expect a tightly-fought contest. In fact, both teams have scored 11 goals in the last 15 minutes of the match and there could be twists in the tale late on.

In the league stages, ATK defeated Chennaiyin in Chennai before Coyle’s side returned the favour in Kolkata. But now what matters is who will emerge triumphant in Goa