The ultimate dream as a Nation is to qualify for the World Cup, says Sandesh ‘Arjuna’ Jhingan 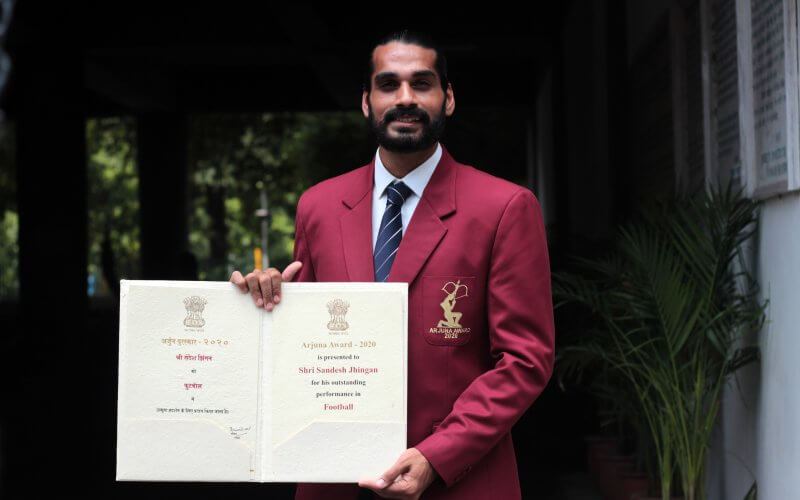 Moments after Sandesh Jhingan became the 27th Indian Footballer to receive the Arjuna Award, the towering central defender in a freewheeling interview to www.the-aiff.com spoke on a variety of topics ranging from his childhood memory of the Arjuna Award, the virtual ceremony, his “proud parents,” significance of the Award, the “ultimate dream of qualifying for the World Cup,” his “notebooks decorated with names of the Class of 2011,” and much more. EXCERPTS:

When you first started playing professional football, did you ever dream of being an Arjuna?

Initially, the dream was just to get into the National Team. But you set different goals as you grow up, and the Arjuna Award was one of that. Our ultimate dream as a nation is to qualify for the FIFA World Cup but there are certain steps which we need to climb on the pathway – like being regular for the AFC Asian Cup, breaking into the top 100, then into the top 50, winning tournaments at home, and abroad. Physically and mentally, you need to be in sync. As players, we need to stay hungry.

What is your first memory of the Arjuna Award?

I was some 16 or 17 years old when Deepak-bhai (Mondal) and Sunil-bhai (Chhetri) won the Arjuna Award in 2010 and 2011 respectively. I have always had a fascination for suits but as a teenager, I realised that there was something in that red suit which they wore. You could not buy that, you had to earn it. That excited me.

In this world there are so many Awards nowadays — but I felt that the Arjuna Award was something else. I watched them receiving the Award from the President of India at the Rashtrapati Bhawan. Somewhere my inner voice told me – “You need to be there someday.”

The ceremony was a virtual one this time.

Under current circumstances that were on the cards, and no complaints at all. The Secretariat House in Chandigarh is a grand place too. As kids, we grew up looking at it with awe from outside. So getting into it — that too to receive the Arjuna Award is huge – that’s my happiness.

But life does not end here. The fact that I have not been able to meet the honourable President motivates me to do more, and get an appointment with him in the near future.

Whom do you dedicate the Award to?

When I first received the news the first reaction was to visualise how proud my parents would feel. This Award is all for them, and my brothers. It’s a momentous occasion for my parents to see their younger son receive the Arjuna Award. Tomorrow they will walk with their head further higher knowing that their son is an Arjuna. The same applies to my brothers.

Also a big shout-out to all the medical staff, the CEOs, and obviously all my teammates from the school team to the ones in my club and the National Team – all of them who have been part of my journey, and also my critics.

Is the Award a motivation, or an extra pressure — given that you are now in an elite list — not just from football, but across all sports and legendary sportsperson.

People who know me know how much I crave to be under pressure. But I see this Award as a responsibility. I thrive under the responsibility. I always prefer to be that guy in the room with all the responsibility than one sitting at the corner. The recognition of my performances makes me extremely happy. A big Thank You to the AIFF President Mr. Praful Patel and General Secretary Mr. Kushal Das for nominating me.

Sunil Chhetri mentioned that ‘Sandesh is someone whom I trust blindly and can go to war all secured with him.

Sometimes I pinch myself to just feel whether all of these are real. I had wallpapers of Sunil-bhai, Subrata-bhai (Paul), Mangi-bhai (Gouramangi Singh), Climax-bhai (Lawrence) and all others on my mobile phone. My notebooks were decorated with their names all over. And now these legends talk about me – it’s a surreal feeling. I am extremely privileged to learn so much from them. That’s my Award.