If football is one of the popular games in the Central India, then its credit should be given to Kamptee’s Rabbani Club – a look at their glorious history.

Established in pre independence era in 1936, Kamptee’s Rabbani Club has completed 85 years in football making it probably one of the oldest football club in central India. The club has a glorious history of producing number of national and international footballers from a small town like Kamptee, which brought laurels to the district as well as country.

Abdul Rasheed, father of late international footballer Nazeer Pagadu was the first president of the club while Master Sheikh Hussain Rabbani was the secretary. Sheikh Rabbani devoted his entire life for the sake of club, school and community . Therefore it was decided to name both club and school after his name.

After the death of Abdul Rasheed, Abdul Matin, the vice principal of Rabbani School remained the life president of the club. During his tenure as a president, Mohammad Umar Khizrai, Mohammad Yusuf Ansari and Mohammad Zaheer-ul- Hasan held the post of secretary. After Abdul Matin, Mohammad Iqbal Sayeedi was nominated for the post of president.

In the year 1942, for the first time Rabbani Club participated in Jinha Cup at Delhi and then in 1945 got the opportunity to participated in Nizam Gold Cup at Hyderabad. This is the only club from Vidarbha, who played in all the major tournaments like DCM Cup, Mumbai Rovers Cup, Durand Cup, IFA Shield at Kolkata and Gold Cup in Patna.

In the CYMS league, Rabbani Club has created history by winning the championship most number of the time. The period of 1947 to 1955 is considered as the glorious period for the club. Mohammaden Sporting Club, one of the top 3 football clubs of Kolkata were so much impressed by the players that they went on to sign half a dozen players from the club. Players who played for Mohamaden Sporting include Mushtaque Ahmed, Mohammad Ali, Salauddin, Mohammad Nazeer Pagadu and Mohammad Ibrahim, Mohammad Yusuf, Mukhter Ahmad, Mohammad Zaheer-Ul-Hasan Ansari and Qumruddin, Salauddin.

One of the most prominent player of Rabbani Club would be Mushtaque Ahmed, who played for India XI in an exhibition match against Russia in 1956 at Jabalpur. He scored a goal and became famous as wonder boys of the club. In the said match Mohammad Nazeer Pagadu, another Rabbani player was the goalkeeper on the Indian team. In 1957, Mushtaque received a trophy from the first prime minister of India Pandit Jawaharlal Nehru during the DCM Trophy Football Tournament at New Delhi. Rabbani Club also went on to emerge winners in Rovers Cup, Bombay Football Tournament in 1955. 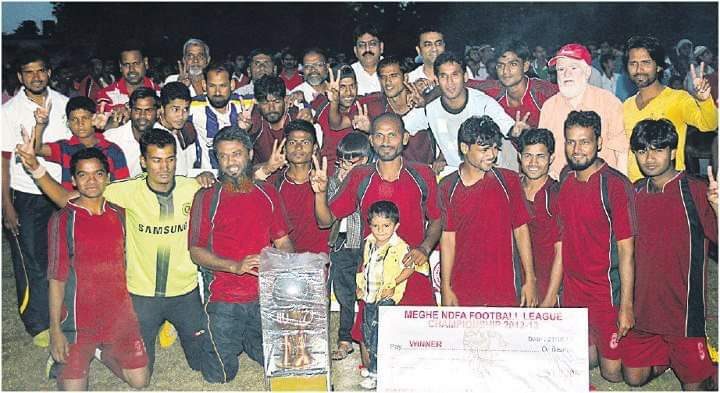 Others include Mohammad Ali, who got prestigious Shiv Chhatrapati award of the state government in 1974. He became the first footballer to beg the award given by Maharashtra state. Ishrat Kamal of this club represented India in Asia Cup in 2006 held in Japan. Inteshar Alam represented the Indian school team at Singapore.

There are numbers of others Rabbani players, who have played for clubs like Air India, ONGC, Pune FC, J&K Bank Kashmir, & others clubs in I league & other domestic tournaments all over the India. Currently one of fellow Rabbanian, who started his football career in the club and last played for East Bengal FC is Asheer Akhtar. He has already played for Pune City FC,  Salgaocar FC, Lone Star Kashmir & Bengaluru FC(notably in AFC Cup).

In recent time, Rabbani Club won NDFA Super Division Football Title in 2011-2012. Just few days ahead of platinum jubilee, the players expressed their gratitude towards the club by winning Majju Seth Memorial Football Tournament – a gift to the club on a memorable occasion.

￭ Won All India Hind Challenge Shield at Raipur in 2010. & many more

The Atlanta FC story – From fifth tier to Mumbai’s top division in a decade
Chhetri-bhai is the best, and he wants to be the best every single day: Abdul Sahal