Team FootballCounter went up and close with Indian International Nikhil Poojary to talk about his journey so far as a professional footballer. He spoke about his initial days, struggles, and the experience of donning the national jersey.

Growing up, was it always an aspiration to become a footballer? When and how were you introduced to the game?

I started playing football in school. It started with a trial when I was in 4th grade, when I was around 9 or 10 years old. Initially I played football for fun like every other kid in a school. Back then, there was no decision or such, but we played because we enjoyed the sport. In fact, it was one of those things which you enjoyed in school. But when I reached 9th Grade, I started getting more serious about football in general. I believe it’s been a gradual process.

Tell us about your memories representing and captaining Maharashtra and Mumbai FC in the U-15 category?

Our school had a big name when it came to Football at the inter-school level. So, the students were attracted to the sport easily and I guess the school coaches Sunil Poojari and Amjad Khan did a great job in helping us. I attended the trials for Mumbai FC and Maharashtra teams when I was in 9th grade.

I came out of Nerul for the first time to attend the state team trials. Back then, they happened at CST. It was almost a month-long trial and I got selected and we went to Madhya Pradesh to play. We didn’t have good results, but it was a memorable one for me being my first nationals. Then I joined Mumbai FC U15 under Naushad Moosa and started getting more serious about the sport. We played in the Manchester United Premier Cup in 2011, where we performed really good and only lost in the final on penalties to Salgaocar. If we would’ve won that we had a chance to go to Thailand for the regional finals, and everyone thought this is their only chance for a foreign trip. Burt now when I look back, it was just the beginning of something special. 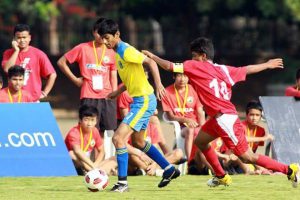 What did you learn from playing at the MDFA representing teams like Mumbai Tigers and Air India? Who were the coaches to have helped you better your game?

Playing MDFA League has always been helpful and important. In fact, I started early on joining the team of Ryan Group of Schools which played in the 1st Division back then. We got promoted to the Super Division. Then when I joined Mumbai FC, my performances were good enough to attract Coach Moosa’s attention who then drafted me into the U19 squad. Since we were in the Elite Division, I played mostly as a substitute, but what was more important was the experience. Most of our team was 18 years old, and being a younger kid, soaking in that experience was crucial for me since the football was played at a much higher level. Even the training with the team was an important aspect for me. I used to travel from Nerul to Borivali every day or two years.

Then when Mumbai Tigers launched in Vashi, so I attended the trials there. Coach Bimal Ghosh was impressed and drafted me into the senior side with the likes of Paresh Shivalkar, NP Pradeep and Steven Dias. So, it was a big thing for me. When they decided to close, I had to move to Air India under coaches Godfrey Pereira and Anthony Fernandes. That season I didn’t miss a single game at any level and we became champions of the Elite Division. Playing at Air India was a big learning lesson for me in my career because that’s when my professional career really started. 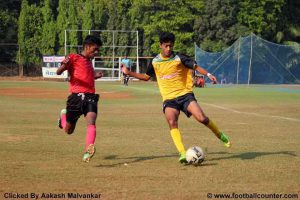 After Air India, you opted to try your luck at East Bengal. During the process of reaching Kolkata to give the trials, you travelled without having a seat in the train. Tell us about the entire experience?

It was a tough time then. There was an offer to try out at Mohammedan Sporting in November 2015. And with the situation of no team in my hand I knew I had to take a tough call. I decided to take on a 36-hour, unreserved train ride to Kolkata and try my luck. It was around Durga Puja and I didn’t get a seat, so I slept next to the toilet at the start of the journey. I soon met some East Bengal supporters on the train, and when I told them I was Rahul Bheke’s friend (who was at East Bengal at that time) and was going for trials, they gave me some place to sit.

When I reached Mohammedan, my arrangements were made in the dressing room and I managed to stay there for the next one week of trials. In the week that followed, I gave a trial and during the off time, I would watch the first team play in the Calcutta Football League alongside the supporters. I would travel with an entire truckload of fans — I had never seen anything like it before, because who asks a footballer anything in Mumbai? I would join them to the ground and back, eat biryani with them and get to see what Kolkata football was all about. It was nothing like I had experienced before and when I spoke to my mother, I remember telling her that I wasn’t going to find a team better than this one.

I was dejected because I couldn’t get a contract at Mohammedan. I was thinking about returning home, but my agent told me about a trial from East Bengal. I wasnt sure about it but decided to try my luck. EB’s legend Alvito D’Cunha, did a background check on me by calling my coaches. After three sub-par days of trials we had a practice game with Army XI which was the turning point. I scored two goals in the game and landed a three-year contract which was something unreal for me. 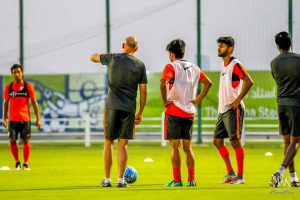 You extended your contract with Hyderabad FC till 2023, what is your target with the ISL franchise and what do you feel about the football culture at Hyderabad?

Honestly, I’m very excited about the future with Hyderabad FC. After the coaching change, we have been working with a new philosophy in the latter part of the season and with Albert Roca joining in, it will help all of us immensely. He is a big coach and has loads of experience. But it is also up to us to work hard and make it count. I feel settled here, and signing a three-year extension means I can focus on helping the team as much as I can. The culture here is unique. The history of the game here is immense and it is now up to us to help revive it not just in the city but also in the region. As Hyderabad FC it is our responsibility to give a boost to the football ecosystem in the region. 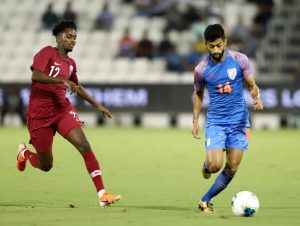 How has been the experience of representing the national team for the first time back in 2017 to recently playing out a goalless draw against Qatar?

Playing for the national team, is probably the biggest thing in any sportsperson’s career, and I will always hold the debut match against Mauritius close to my heart. Because that’s the day I fulfilled one of my dreams. Playing against Qatar in their country was a big challenge because they have such quality players. They are the defending Asian Champions and they won the title by scoring freely. So, for us to defend the way we defended against them showed our character. Overall, it has been a great experience playing for the national team because you play against countries who have different styles and that tests you to the maximum.

Also Read: From Kamptee to Kolkata – A tale of Asheer Akhtar

He was a ‘fighter on the pitch and friend off it’, recall Manitombi Singh’s former Blue Tigers teammates
Training kids of the Kuki Tribe, Len Doungel finds ‘rich hearts’