When Asheer was asked whether football had always been his passion, “Football is in my blood” came his instant reply.

He grew up facing numerous difficulties on the field but never thought of giving up. Growing up seeing his father play competitive football, he chose the sport as his way of life at a tender age. Asheer first kicked the ball when he was a 12-year-old. Studying at M.M. Rabbani High School in Kamptee, his first opportunity to play competitive football came with his school team. Showcasing his talent at various stages, he soon received call ups from the Maharashtra State Team. He was even called for two National Camps during the time.

After completing his Secondary School Certificate, he moved on to Bokaro’s Sail Academy. Spending two years at the academy, he came back to his hometown due to certain issues. “Unfortunately, I was rejected in both the National Camps. But I never lost hope. After Xth, I moved to SAIL Football Academy, Bokaro. They came to take trials in Nagpur. I spent 2 years in Bokaro. During that time, I played in the Subroto Cup U-17 for Jharkhand State in Delhi. After two years, I came back home due to certain issues. After returning, my only dream was still to become a footballer. But I failed to get the platform to become a professional. So this was a very hard time. For me, things wouldn’t have been the same if my family, especially my father didn’t encourage me to look forward” reminisced Asheer.

Asheer joined SK Porwal College in Kamptee. During his college days, Asheer was a renowned name in Nagpur football. All his life, he has been known for his discipline. He was one of the highest-paid players, plying his trade for Rabbani Club in the Nagpur League. But Asheer’s difficulties never seemed to stop. “I gave trials for the University team but I was rejected. Everyone who knew me were very shocked to hear that. During those days, I played for Rabbani Club in Nagpur League. I also played in Nagpur Premier League and was the 2nd highest-paid player in that league auction.” recalled Asheer.

After multiple attempts, Asheer’s commitment finally bore the fruits. Training under Asif Ansari (Former Air India Player) and Ishrat Kamal (Former Indian International), he got his first break. He was sent for a trial at Pune FC and grabbed the opportunity with open arms. The then Pune FC Head Coach Naushad Moosa was very impressed with Asheer. “I reiterated about my passion for football to my coaches. When I finally started to prove myself in front of them, they arranged a trial for me at Pune FC. I went there and got selected. I was way too happy to get a platform like Pune FC to kickstart my career.” said Asheer. 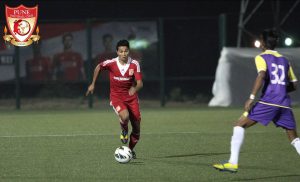 In the early days, Asheer used to play as a Central Midfielder. Under Naushad Moosa’s guidance, he adapted as a Right Back. “Naushad Moosa was my Coach at Pune FC U-19 Team. I learned a lot from him. He taught me about the basics of football. Moosa sir improved me a lot. We played various tournaments under his guidance and I got matured by the time. We were the Runner-up of the U-19 I-League that year (2013-14)” recalled Asheer.

As luck would have it, when Asheer was finally promoted to the Senior Team to play in the I-League, Pune FC shut shop. “When Pune FC was shut, I was again left with no options. I spent time at home thinking about where to go. I had nothing left here in Nagpur.” said Asheer.

Asheer’s next stint was at Lonestar Kashmir. Accompanied by his best pals Farukh Chaudhary and Altamash Sayed, they set out on an edgy journey. “Moosa Sir recommended me to join Lonestar Kashmir to play in the 2nd Division League. I was joined by Farukh and Altamash. At first, our families did not agree to send us at Kashmir. Somehow we convinced them. It was very difficult at the start of the season but later situations got better” said Asheer.

As they were coping up in the new environment, a natural calamity put a halt to the proceedings. A severe Earthquake hit Kashmir that year. All three of them were on the verge of leaving the club. 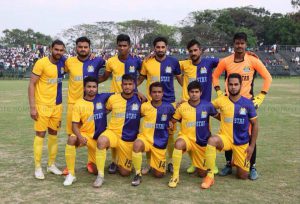 Somehow, the management at Lonestar Kashmir and Farukh’s father motivated them to stay. They continued and represented Lonestar Kashmir in the 2015-16 2nd Division League. Speaking about life up in the beautiful valley, Asheer described with gusto. “After the Earthquake, it took us some time in returning back to normalcy. Slowly, we coped and started to enjoy the moments. We used to interact with the local players and they supported us a lot. From what I have seen, I think the people of Kashmir have a great passion for football. They used to come in big numbers to cheer us. Their continued support helped us to qualify for the second round. Playing in the valley is one of the finest experiences for me so far” quoted Asheer.

In the next season, Asheer represented Salgaocar FC. They ended up being the champions of the Goa Professional League. Asheer claims the standard of football in Goa to be one of the best in India. “I think when I first came to Goa, the initial challenges were to adapt to a different climate and that I had no known faces in the team. Playing in Kashmir, I got familiar with a different climate and then had to cope with an extremely humid climate at Goa. The Goa Pro League has a very good standard. Every opponent is tough. It took me some time, but soon I started to enjoy playing in Goa.” quipped Asheer. 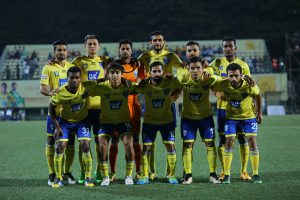 After winning the Goa Pro League, Asheer came down to Mumbai to make his debut into the top tier of Indian football. He received an offer from Mumbai FC. Asheer describes it as one of his best seasons as he got to play with the likes of Pratik Choudhary, Kunal Sawant, Steven Dias, and Mehrajuddin Wadoo. “I never played at that level before. Mumbai FC was the best professional football team in Maharashtra during that time. I got to play with more matured players than me. Steven Bhai helped us a lot growing up. When I joined Mumbai FC, I already started to feel like home. I made my debut against Aizawl FC at the Cooperage” reminisced Asheer.

After completing the season with Mumbai FC, Asheer acknowledged his mentor Naushad Moosa’s call and joined Bengaluru FC Reserves. He proved his mettle during the matches and received a call up from Albert Roca (Former Bengaluru FC Head Coach) to join them for the Senior Team Sessions. “I can’t explain the feeling when I went to train with the senior team. There was our captain Sunil Chhetri, Rahul Bheke, Khabra Bhai, Erik Paartalu, Miku, Dimas and many other players whom I used to watch on TV and imagined playing alongside them” recalled Asheer, who feels that getting an opportunity to play at Bengaluru FC is nothing less than a dream coming true. 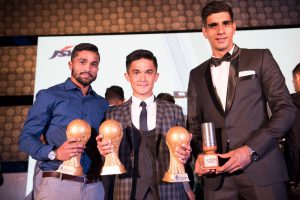 Completing the season at Bangalore, Asheer decided to come further East. In 2019, Asheer set his foot in Kolkata to play for East Bengal FC. He made his debut against Jamshedpur FC in the Durand Cup and played in the Calcutta Football League. The love and blessings showered on Asheer from the passionate football fans at Kolkata have made him feel at home, and he is enjoying his time at West Bengal.

Throughout his career, Asheer’s confidante has been Farukh Chaudhary. Starting their journey at Pune FC, they played together at Lonestar Kashmir and then at Mumbai FC together. Both the players are considered to be one of the best at their respective positions. Speaking with Farukh, he was full of praise for his best friend.

“From the day we joined Pune FC Academy until today, Asheer has grown to become an outstanding player. As a defender, I would say that he’s a fighter and he would do anything for the team. Well, he is a great human being and also he’s one of the best things football has given me. He’s my brother from another mother. We have always been there for each other in good and bad times. I’m so happy and proud of the person and player he has become now” – Farukh Chaudhary, Forward at Mumbai City FC. 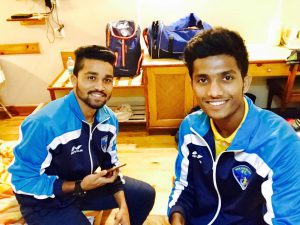 Growing up in Maharashtra, Asheer strongly feels that the state needs more teams for the budding talents. “Having only Mumbai City as the club in Maharashtra is not sufficient for the upcoming players. Before we used to have Mumbai FC, Air India, Pune FC, Mahindra United, DSK competing at the top-tier. Now we have none except one franchise.” said Asheer.

Having played in all corners of the country, Asheer is currently maintaining a proper regime during the pandemic. He has set his vision to improve himself and soon represent the National Team.

Also Read: Maurya Foundation – The Undisputed Leaders On & Off The Pitch