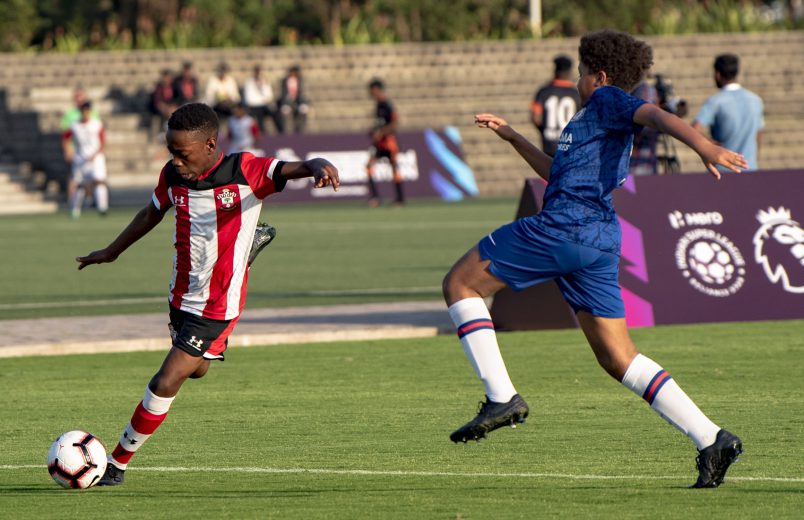 An All-English clash was one of the highlights of the evening leg of Day 2 of the PL-ISL Next Generation Mumbai Cup 2020 as the youth team of Chelsea took on their counterparts from Southampton, here at the Reliance Corporate Park Football Ground, Navi Mumbai

Both the teams started rather conservatively, focusing more on not conceding to their opponents preferring to stay back and not press. Ato Ampah from the Young Blues outfit, had other plans as he wreaked havoc with his incisive runs from the right flank. He decided to change the momentum of the game with an ambitious initial strike which was palmed away by the Soton’s goalkeeper, Alfie Prescott. However, he found success in the ninth minute, as he steered his way into the box, showed innate control and curled the ball into the net.

Southampton did find the net shortly after Ampah’s goal but Ryan Chavez-Munoz’s effort was ruled out as an offside. Their centre-back, Ethan, drove the team ahead with some confident runs into the midfield but most of his passes were intercepted or rather well-dealt with by the Chelsea players.

The match continued to remain equally competitive even in the second half, but the teams were at times unable to display that elusive finishing touch to the trouble the goalkeepers. Chelsea piled up the pressure as the match entered its dying embers, and it was eventually Jack Phillips whose flawless strike in the final minute of the regulation time ensured that his team doubled their lead over the ‘Young Saints’.

Southampton’s striker Adetonkunbo did try to pull one back as he took a clean and concise shot which unfortunately whisked past the crossbar late in the injury time.

The young brigade from Chelsea wrapped up another convincing victory to register their third consecutive win in this tournament.