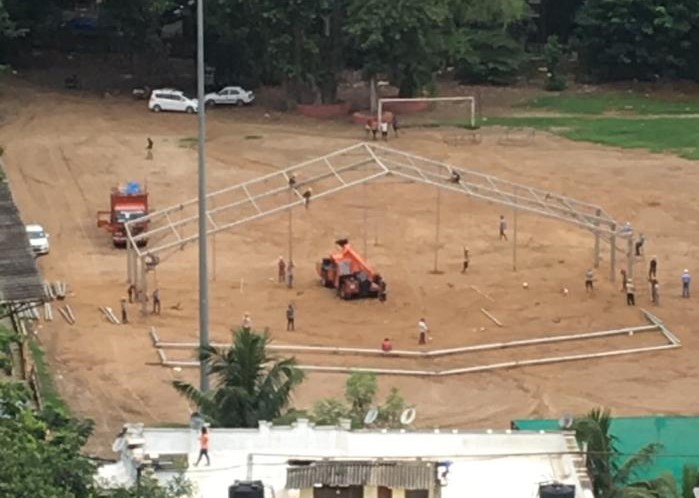 The raging pandemic has devastated livelihoods. It’s only yesterday when the nation saw its death toll reach 2003 in 24 hours, the biggest ever in India. The current lives lost to this unknown entity stands at 11,903. The nationwide COVID-19 confirmed cases surges to 3,54,065.

The virus loves people. COVID-19 feels comfortable to raise its siblings in dense areas and Mumbai is immensely dense in population. The city records close to a staggering figure of 21,000 human lives per square kilometre. The city has seen a huge count of total 60000+ cases, where 26000+ are still active cases.

To meet the increasing demands, the St Xavier’s Parel Ground has been converted into a testing centre. As per our sources, the Parel Ground will only be used for testing as of now. With a considerable rise of cases in the nearby areas, the King Edward Memorial Hospital is filling out on wards. If the hospital reaches its maximum capacity, the Parel infrastructure will come handy.

The St. Xavier’s Parel ground is the home to Mumbai footballers. The MDFA use the facility for their division games. Every weekend, the Yuva Premier League, the MDFA 1st, 2nd, and 3rd Division matches used to take place in the venue.

Sergio did a great job, next step is to do well in AFC Champions League: FC Goa Head Coach Juan Ferrando
India in Pot 3 for official draw for AFC U-16 Championship Bahrain 2020