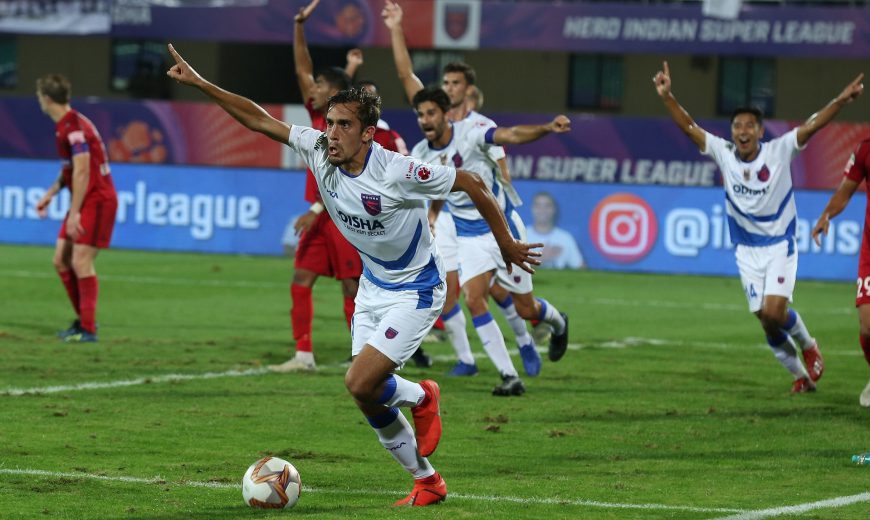 Odisha FC kept themselves in the hunt for a Hero Indian Super League play-off spot after a come-from-behind 2-1 win over NorthEast United FC at the Kalinga stadium here on Friday.

Martin Chaves (24’) had handed the visitors the lead but Odisha turned it around in the second half, thanks to goals from Manuel Onwu (46’) and Martin Perez Guedes (72’).

The win sees Odisha rise to the fifth spot and still have a chance of qualifying for the play-offs, while NorthEast United’s poor run of form continued. Odisha started the game on the front foot with Guedes seeing a shot go wide early in the game. NorthEast started to grow into the game but Odisha carried the bigger threat.

Odisha had a good chance when they broke forward from a NorthEast corner in the 18th minute. Onwu charged forward before finding Xisco Hernandez who opted to go for goal from distance which forced a save from Subhasish Roy Chowdhury.

However, against the run of play, NorthEast took the lead in the 24th minute. A quick freekick from Federico Gallego sent Chaves through on goal and the Uruguayan held off Shubham Sarangi and slid a finish past goalkeeper Arshdeep Singh.

Odisha stepped their game up after that and should have equalised before half-time. Sarangi wasted an opportunity at the far post after the NorthEast defence failed to clear a cross in the 28th minute, while Subhasish was forced to make two good saves from Marcos Tebar and Guedes in quick succession.

Guedes had another shot that was saved while Sarangi managed to get into the box after side-stepping a couple of defenders, only to send a feeble effort straight into the goalkeeper’s hands.

A deserved equaliser came right after the restart. Xisco spread a ball to Nandhakumar Sekar on the wings and his cross was turned in smartly by Onwu. Odisha kept on piling the pressure in search of a winner and got their goal in the 72nd minute.

Xisco’s corner was headed on towards the far post by Onwu and Guedes was able to squeeze it in to hand Odisha the lead. Despite the best efforts of Keogh and Ninthoinganba Meetei, the latter’s sparkling run in the 83rd minute almost forcing a goal,  Odisha managed to hold on and notch all three points and keep themselves in the hunt.