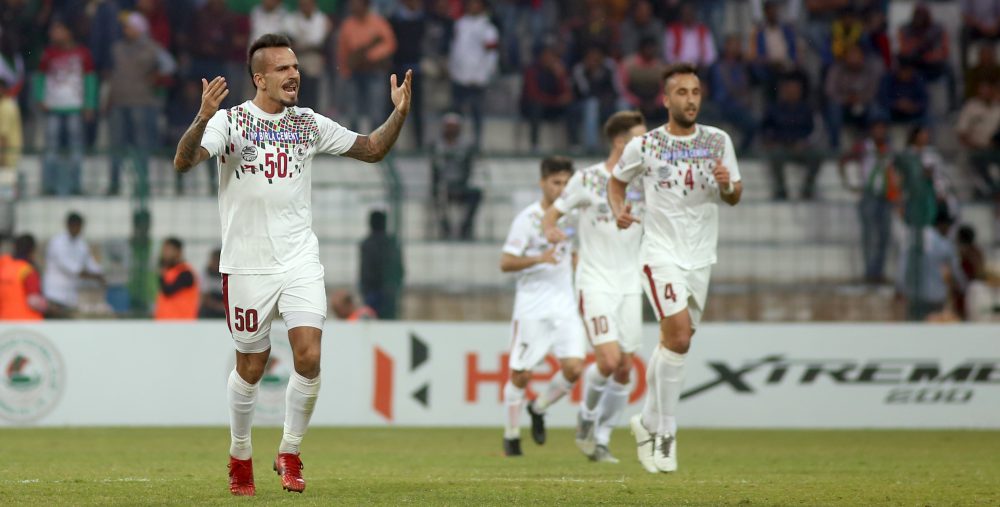 Eight goals, two missed penalties, one hattrick and a red card – this game had it all! At the end of it, table toppers Mohun Bagan powered past Manipur’s Neroca FC 6-2, in an absolute goal-fest at the Kalyani Stadium on Friday.

History was created in this match, as it was the first time in the Hero I-League that seven goals were scored in the first half of the match.

Spanish midfield general and Hero of the Match Fran Gonzalez netted a hattrick to take his goal tally to a league-leading nine for the season so far, while countryman Fran Morante, Senegalese striker Papa Diawara and Romario Jesuraj all chipped in with a goal each to complete half a dozen on the day for the Green and Maroons. Nigerian frontman Philip Adjah and Singham Subash Singh scored for the visitors.

Seven of the eight goals and a missed penalty came in a fascinating first-half and it was all started by Gonzalez as early as the 11th minute. Fellow Spaniard Joseba Beitia was on top form, registering a hat-trick of assists in the game – setting up Gonzalez on his three goals. The former also played a part in Fran Morante’s goal, as he sent in a corner that was controlled at the far post by Komron Tursunov, who’s shot was nodded in by Morante.

The carnage continued as ex La-Liga striker Diawara got into the act, creating the fourth for himself. Off a throw-in by Ashutosh Mehta, Diawara played on VP Suhair who ran into the box to send a cross-back for the Senegalese to score with a perfectly connected side-volley. Keeper Marvin Phillip, who had a good game otherwise, thwarting many of Mohun Bagan’s 12 shots on target had no answer.

In between, Gonzalez also missed a penalty which was saved superbly by Phillip.

Neroca got their first when Varun Thokchom played Adjah from inside his half and the burly Nigerian went off on a solo run holding off his marker and unleashed a powerful drive once inside the box to beat Sankar Roy, the Bagan keeper.

Bagan responded immediately with Gonzalez’s hattrick. It was all confusion in the Neroca defence from another Beitia cross and it was left to Gonzalez for a simple tap in from close as the stray ball fell to him.

Neroca, however, had the last say of the half, when Subash finished calmly after Pritam Singh had made one of his trademark penetrative runs from the right and cut back for his onrushing teammate.

This finish to the half naturally pepped up the Neroca boys who gave a much better display of themselves in the second. They looked the more threatening of the two sides in the first quarter of an hour, however Bagan were consistently creating and missing their own scoring chances as well.

At the half-hour mark, another incident altered the course of the Bagan game. The hardworking Dhanachandra Singh took one for the team as he was red-carded for stopping Ronald Singh’s overhead kick from going in, with his hand. This was after Adjah had beaten Sankar with a top of the box strike, only to hit the crossbar, and the rebound had fallen to Ronald.

The referee had no option but to give Dhana the marching orders and point to the dreaded spot for a second time in the game. And for the second time, a penalty in the game did not end up in the back of the net, as Adjah’s effort missed the target.

Vicuna immediately sacrificed Komron Tursunov, who like all Bagan players had been having a brilliant game, for Gurjinder, to bolster the defence. But it was his second substitution- resting the dynamic Nongdamba Naorem for Romario Jesuraj, which effectively killed any fight that Neroca might have had left.

The Tamil winger scored with his very first touch. He had come on to the pitch taking advantage of a corner earned by his team and made his way into the Neroca box, unnoticed and unmarked. As the second ball fell to him, he let go of a powerful right-footer which beat Phillip at the near post.

Mohun Bagan have now opened up an 11-point lead at the top with 29 points from 12 games, with second-placed Punjab FC on 18 points. Neroca still find themselves in the relegation zone with 12 points from 13 completed matches.