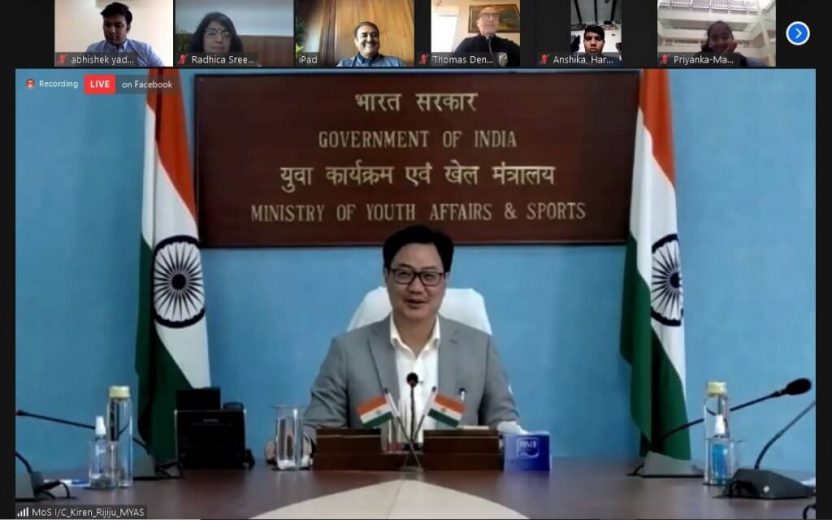 All India Football Federation President Mr. Praful Patel and Minister of State of the Ministry of Youth Affairs and Sports Shri Kiren Rijiju interacted at length with the India U-17 Women’s National team and assured them of their full support and laid down a roadmap for the girls on Tuesday (December 1, 2020).

With the FIFA U-17 Women’s World Cup India being shifted to 2022, Mr. Patel stated that the players will receive many opportunities to represent the country in the future and highlighted that the AIFF is fully committed to developing women’s football on a long-term basis with the vision to take the team forward together.

“Our young girls should not lose hope as they will get a lot of opportunities to play for India and make the nation proud. This group of players will get ready for the upcoming qualifiers for the FIFA U-20 Women’s World Cup 2022, and with India set to host the AFC Women’s Asian Cup 2022 as well, these players will be contenders to become part of the senior Women’s National team in that event,” Mr. Patel said.

“The disappointment is there but there is a bright future ahead. It is the direction in which we will move forward. The FIFA U-17 World Cup has been delayed but we will build momentum till 2022 and the AIFF stands committed that these girls will represent India on various platforms and in various competitions. I thank Hon’ble Minister Shri Kiren Rijiju, the Ministry and SAI for their continuous support and dedication and passion towards the development of Indian football.”

Mr. Patel said that he was expecting the team to take Indian football to a “new level” and highlighted the various opportunities for the team in the coming years.

“It pains me that some girls from this team will not be able to play in the World Cup in 2022. They had been working tremendously hard and we were expecting them to take the game to a new level. As part of our vision and with support of Ministry of Youth Affairs and Sports, we shall continue long-term domestic camps and regular competitions with top International teams, so that the future of these players remains connected with football and they keep playing at the top-level,” he averred.

“We want to give them the opportunity to play at the Asian Games and like we formed the Indian Arrows boys team, we will form an Indian Arrows team for girls that will take part in the Hero Indian Women’s League. We are committed to women’s football and want to keep moving forward. As women’s football continues to progress, we hope to see the Indian team participating in the FIFA Women’s World Cup and I am hopeful that by the 2027 edition, with the continuous support, this team can represent the nation very well,” Mr. Patel stated.

Union Sports Minister Mr. Rijiju lauded the fact that India was named hosts of the FIFA U-17 Women’s World Cup 2022 and interacted with members of the team and assured them continuous support for future age-group and senior-level tournaments.

“With India named hosts for the FIFA U-17 Women’s World Cup in 2022, I congratulate Mr. Patel and his team for getting FIFA into confidence and assuring that India retains the hosting rights. It shows that they believe that India will be able to host the event successfully and it has reduced the disappointment of the postponement,” he said.

“Interacting with players helps understand the various needs of the players and forge the direction in which we need to move. I know these players will be disappointed but we will not let their spirits drop. They have just started and there is a long way to go for them. I would like to assure them that we will continue to give the required support for their FIFA U-20 World Cup qualification campaign and at the senior level.

“Football is the world’s most popular sport and we have to give our all to promote football in India. In women’s football, we have the ability and that day is not far that we will qualify for the FIFA Women’s World Cup,” the Hon’ble Minister stated.

Meanwhile Shilky Devi, who had captained the U-17 Women’s Team, said that the girls are highly motivated to help India qualify for the FIFA U-20 World Cup in Costa Rica on merit.

“As much as we are sad about missing out on the U-17 FIFA World Cup, we are also determined to represent India in the 2022 U-20 World Cup on merit. Those of us who are not eligible for the U-17 World Cup anymore, will train as hard as possible to achieve this goal,” said Shilky.

Winger Sumati Kumari stated that the players have been motivating each other for the challenges that lie ahead.

“The announcement of the postponement of the U-17 World Cup was indeed sad news for us. But we were really encouraged when the AIFF, SAI and the Sports Ministry put out the roadmap for our development ahead,” she stated. “We have all been motivating each other for the U-20 World Cup qualification campaign, and all the preparation that lay ahead of us.”

Head coach Thomas Dennerby outlined the progress that the team had made during the long camps in preparation for the mega event.

“When we closed the camp back in March this year the girls had already shown so many good signs of improvement in terms of tactics, technique, pace, and the mental aspect of the game,” said Dennerby. “They had performed at such a high level on their tours to Romania and Turkey as well.”

“We already have eight fantastic girls who can do very well. The others will progress to the U-20 team. I thank everyone for all the support that they have shown. Dhanyavaad.”