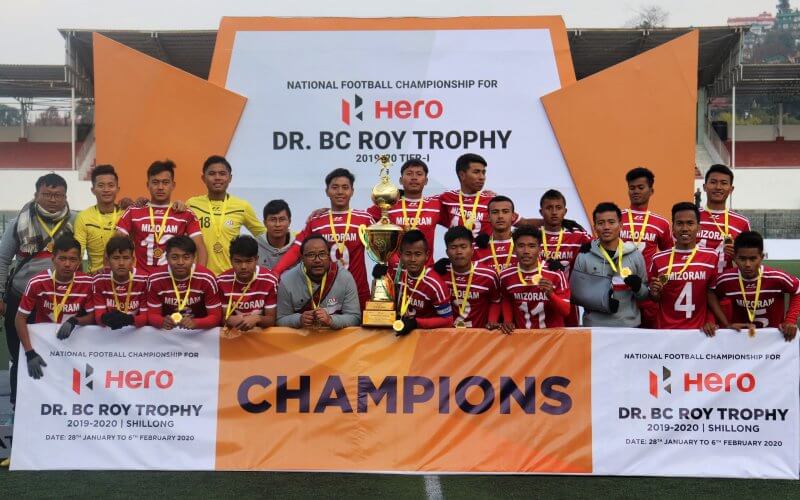 Mizoram emerged triumphant in the final of the Hero Junior National Football Championship for the Dr BC Roy Trophy at the Jawaharlal Nehru Stadium in Shillong, Meghalaya on Thursday (February 6, 2020), defeating Punjab on penalties.

Malsawmtluanga put Mizoram in the lead in the first half, while Tania Raji scored the equaliser right after the change of ends, as the teams finished at 1-1 after both regulation and extra time. Mizoram, thereafter, clinched the tie 5-4 on penalties.

It was the defending champions Mizoram, who got off the blocks early on, as they looked to keep the ball on the deck and pass it around. It took them one-third of the match to get the breakthrough that they were looking for.

Lalawmpuia Sailo worked a short corner and sent in a left-footed cross that was nodded powerfully into the ground by Malsawmtluanga, as the ball rippled the roof of the net.

This was the first time that Punjab conceded in the tournament.

That goal gave Punjab some impetus, as they began to work the ball to the flanks. Amanjeet Singh looked lively down the right flank, sending in dangerous crosses.

However, it was after the change of ends, that Punjab mustered-up their equalising goal. Having been awarded a free-kick around 35 yards out, Punjab captain Mangminlun Singson leathered the ball as Mizoram keeper Lalrinzuala H could not gather it. Substitute Tania Raji emerged from the chaos to tap it into the net for Punjab.

Late in the second half, FC Pahnai was put through on goal but the Mizoram attacker’s attempted shot into the bottom corner was well saved by Punjab keeper Harpreet Singh.

As the match went into extra time, Mizoram winger Lalrintluanga got into the box to tap a low cross into the net. However, he was flagged offside by the assistant referee.

With about five minutes of extra time left on the clock, both the sides looked to make the final push in order to extract a late winner. Seilenthang Lotjem had a crack at the Mizoram goal from the edge of the area but the ball whistled past the post.

Mizoram had two close-range free-kicks, which were both well taken, but the two kick-takers – Lalawmpuia Sailo and Lalpekhlua Jongte – sent their respective efforts over the bar. As extra time came to a close, the match went into the dreaded penalties. Mizoram produced a perfect showing in the penalty shootout, netting all of their five goals. Tania Raji missed Punjab’s third penalty — sending it over the bar — to hand Mizoram the advantage that they capitalised on and went on to lift the Dr BC Roy Trophy.

Hero IWL: Kenkre cruise to the semis with win over Bangalore United
Mr Henry Menezes speaks about the Potential and Future of Sports Textile Industry in India