One of the two regular annual cup events from MDFA – Republic Day Cup, other being Independence Day Cup, will kick off on 24th January with the final on 26th January i.e. Republic Day.

This time, 20 teams involving the likes of Dadar XI, CFCI-CSA, Maurya Foundation and others will be vying for the cup. The eleven side event is one of the few cup events in which lower division clubs get to ply their trade. The three-day event will be directly a Knockout with the Quarter-Finals, Semi-Finals, and the Final to be held on the next day.

Held in the honour of late Dr. Nityananda Mandke, one of the India’s finest Heart Surgeon, the tournament was started by MDFA, back in the year 2004, in recognition of his notable contribution to the city as well as country. Mandke was boxing champion, captain of soccer team and a record holding distance runner, during his college days. He was adjudged the best all-round student of Pune University during the year 1970. 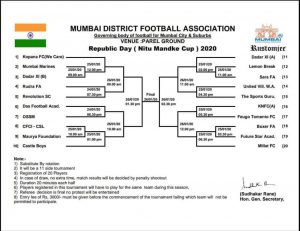