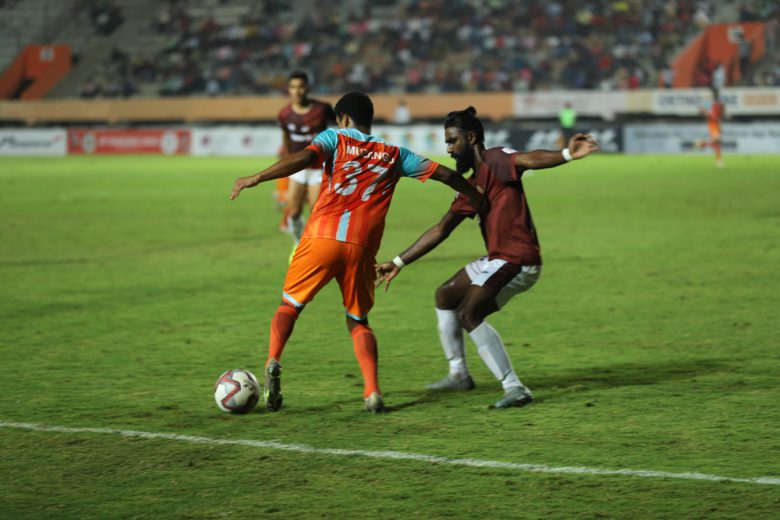 Gokulam Kerala FC earned the bragging rights in the reverse instalment of this season’s Southern Derby by registering 1-0 win over rivals Chennai City FC at the Jawaharlal Nehru Stadium on Wednesday (February 12, 2020).

Marcus Joseph scored the match-winner in the 79th minute to rubberstamp the three points for his side.

Chennai City Head Coach Akbar Nawas named an unchanged eleven while in the other dugout, Fernando Santiago Valera reflected just a couple of changes. Shibil Muhammed and Muthu Irulandi were given the nod in the five-man midfield, with Malemnganba Meitei and Wungngayam Muirang making way

The final score-line reflects a solitary goal but the match in itself wasn’t shy of goal-scoring opportunities for either side. Gokulam could have gone ahead just 90 seconds after kick-off when Marcus Joseph’s shot from inside the six-yard box was kept out by Chennai keeper Nauzet Garcia Santana, who denied Nathaniel Garcia on the follow-up too by pulling off a superb double save.

Joseph had another shot on goal, this time from distance. His attempt had a wicked swerve which wrong-footed Santana, but the Spaniard recovered brilliantly to adjust himself and get a strong hand to the ball.

In the 19th minute, Jan Muzangu displayed some of his Swiss flair, pulling off a string of step-overs and nutmegs to hold the play. Shem Marton Eugene made a smart overlapping run to provide Muzangu with some assistance and after receiving the ball, squared it across goal. With a flurry of orange shirts waiting, Kerala custodian Ubaid CK did well to palm the delivery away to safety.

Ubaid survived a scare in the 34th minute, when he spilt a Muzangu delivery into the box straight at the feet of ‘Fito’ Araujo, who couldn’t react on time, thus allowing Ubaid to redeem himself.

Two minutes before the break, Chennai earned a free-kick in an inviting position. Fito and veteran Katsumi Yusa were the two volunteers for the dead ball and it was the Spaniard who took it eventually. With the ball curling in towards the bottom right, Ubaid kept it out with a magnificent save and denied Vijay on the ricochet too.

Gokulam cleared their line and caught the Chennai backline napping on the counter. Garcia led the charge before crossing it to Henry Kisseka but Santana was alert to the danger as the match ended level-pegging at the break.

The match resumed with the same tempo for the second half, with a goal seeming imminent. In the 50th minute, Fito’s shot from distance was kept out by Ubaid before Gokulam cleared their lines, firing another counter-attack of their own. Garcia ran the length of the Chennai half before squaring it to Kisseka who managed to keep his effort on target but was denied by the outstretched legs of Santana.

Santana was called into action at the hour mark when substitute Salman Kalliyath played Kisseka through on goal. He had Joseph lurking to his right but instead, went for glory himself and brought out yet another fine save from Santana.

Both goalkeepers had put on a magnificent display for their respective sides in a match that could have otherwise been raining goals. However, the derby had a hero waiting on the horizon.

The drama unfolded in the 76th minute, when Joseph found the back of the net by heading in a cross from Garcia but was flagged offside. The celebrating Malabarians didn’t notice that the goal had been ruled out and upon turning around, found their backline retracting to deal with a Chennai counter. Fito had the ball at his feet and decided to go for goal himself, but his shot was straight at Ubaid.

Gokulam were on the offence again, this time through Salman Kalliyath, who saw Joseph to his right and squared it across for him and this time, the skipper made no mistake in breaking the deadlock.

Ubaid produced a couple of magnificent saves in the dying seconds, first by palming away Muzangu’s low-driven cross with a flurry of orange shirts lurking and finally, in the third minute of stoppage time to keep out Fito’s deflected shot and showing outstanding reflexes to preserve the three points for his side.

The win catapults Gokulam Kerala to third in the table with 17 points, while Chennai City drop to seventh and remain on 14 points.

Marcus Joseph was awarded the Hero of the Match for his match-winner.