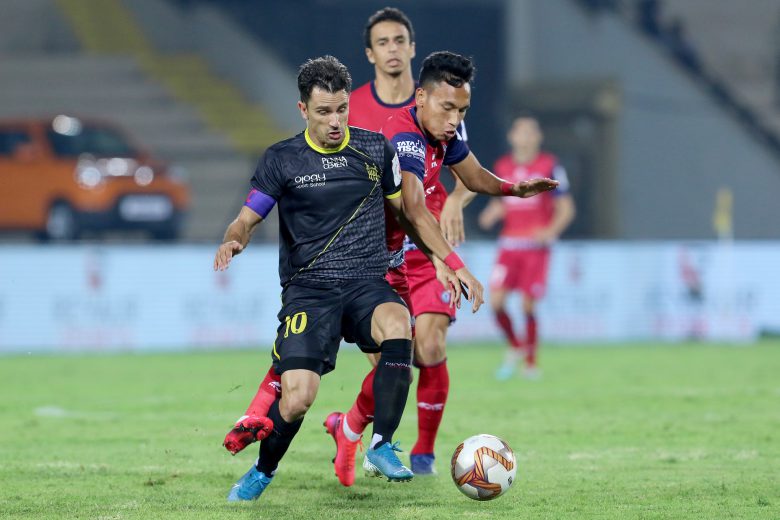 Hyderabad FC were denied a win in their final home game of the Hero Indian Super League season after Jamshedpur FC managed a 1-1 draw, thanks to an injury-time equaliser from Sumeet Passi at the GMC Balayogi Stadium here on Thursday.

Nestor Gordillo’s 39th-minute strike looked to be enough for the hosts to get only their second win of the season, but Passi had other ideas. Hyderabad continue at the bottom of the league table after 17 games with seven points and Jamshedpur are now seventh with 18.

Hyderabad FC had the first chance of the game from a corner-kick in the fourth minute. Marcelinho’s delivery was headed onto the post by Adil Khan before a panicked defence cleared the danger.

Jamshedpur struggled to make an impact in the final third and their shot first sight of goal was when Noe Acosta launched a weak strike from 25 yards. The scuffed left-footer was easily claimed by goalkeeper Laxmikant Kattimani. Minutes later, Marko Stankovic was denied by Rafique Ali from a similar range.

Adil failed to bury another one of his headers from a Marcelinho delivery after the half an hour mark with Rafique Ali producing a fortuitous save. Hyderabad made a mockery of Jamshedpur’s possession of the ball when they broke the deadlock before the break. Marcelinho’s through ball was cut off by Joyner Lourenco, but the loose ball fell to Gordillo who rifled a strike into the back of the net.

Jamshedpur’s star striker Sergio Castel, who had started limping towards the end of the half, was replaced at half time. In his place came Amarjit Kiyam into the midfield, as Antonio Iriondo looked to change the dynamics of his team’s game.

The tempo of the game dropped in the final quarter as both teams struggled to create clear-cut chances. Jamshedpur thought they had an equaliser when a freekick from a narrow-angle went straight in but the referee disallowed it for Passi’s foul on Kattimani.

But in the third minute of injury-time, Passi managed to get onto Noe Acosta’s free-kick and glanced a header with the back of his head to break Hyderabad’s hearts.