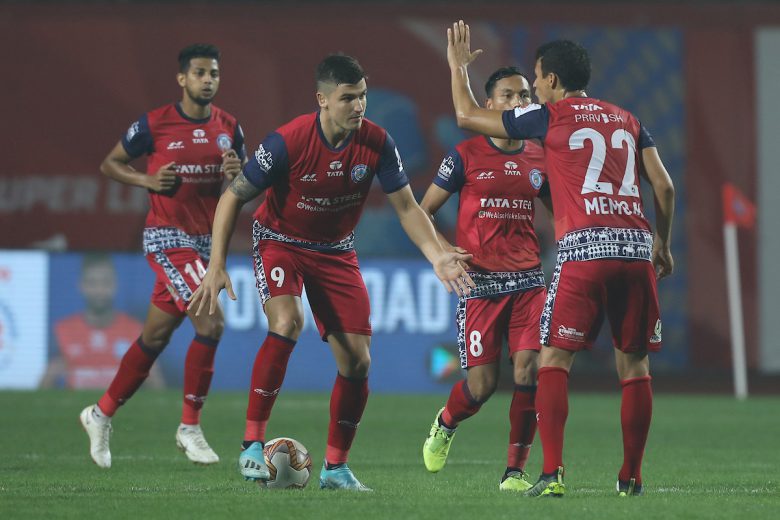 Jamshedpur ended their winless run with a dramatic 3-2 win against Kerala Blasters at the JRD Sports Complex here on Sunday.

Bartholomew Ogbeche turned hero from villain quickly for the visitors, scoring a 87th-minute own goal after his goal in the 55th. Earlier, Raphael Messi Bouli (11′) broke the deadlock before Noe Acosta (39′) and the teams went into the break all-square. Abdul Hakku was sent off for a second yellow card after the restart but Ogbeche had given his team the lead. Sergio Castel’s (75′) also got on the score sheet, making his return to the game after six weeks.

The confidence of two back-to-back wins was evident in how Kerala approached the game in the early stages. The visitors pressed high up the field and their work rate was rewarded in the 11th minute.

Subrata Paul made a complete mess of a poor backpass by Bikash Jairu as he failed to make contact with the ball in an attempt to kick it away from danger. An alert Raphael Messi Bouli, who was leading his team’s press, pounced and scored from a tight angle.

The hosts had a sneak peek at the Kerala goal within minutes but Aitor Monroy’s strike from the edge of the box off Noe Acosta’s low cross from the left was straight at Rehenesh.

The Yellow Army kept threatening with their intensity and forays into the final third. Messi nearly doubled the lead when he was put through on goal midway through the first half but Paul rushed off his line to clear. The keeper also caught Tiri with his challenge and the centre-back had to be stretchered off the field.

Jamshedpur grew into the game and put pressure on the Kerala defence towards the end of the half. An excellent move yielded the equaliser in the 39th minute. A free-kick was worked towards the edge of the box from where Monroy delivered a terrific ball into the box for Acosta who ran in behind the defence and executed a first-time finish past Rehenesh.

Kerala suffered a huge setback minutes after the restart when Abdul Hakku was punished for a late sliding challenge on David Grande. The defender was shown a second yellow card and his team was reduced to 10 men. Despite the numerical disadvantage, it was the visitors who scored the next goal of the game. A terrific Jessel Carneiro cross from the left was met with a powerful header from Bartholomew Ogbeche who regained the lead for Blasters.

With Jamshedpur looking lost in the final third despite having more of the ball, Antonio Iriondo brought on Sergio Castel and he made an impact within ten minutes of his return from injury. The referee punished a handball by Messi Bouli inside the box and the on-loan Atletico Madrid striker kept his cool and made no mistake from the spot to make it 2-2.

Jamshedpur’s relentless pressure in the final third paid off and they took the lead for the first time in the game courtesy of an own-goal in the 87th minute. A low cross by David Grande from the left-hand side of the box hit Ogbeche’s legs and went in, much to the delight of the home crowd. The Men of Steel stood firm at the back to see off the game and pick up a much-needed win.