James Donachie became FC Goa’s fifth new foreign signing this season as he signed on the dotted lines on a season-long loan deal from A-League side Newcastle Jets.

The 27-year-old brings in a wealth of experience having played at the top-level of Australian and Asian football for the best part of the last decade. And that too with much success. Having won the A-League on 3 occasions, the 6’5” man from Queensl and now brings his winning mentality to the shores of Goa.

Speaking after completing the formalities, the defender mentioned, “I am really delighted on the move, and can’t wait to get to India and start working with the team. It didn’t really take much time to convince me to come over.

“The team had been scouting me over the last few months, something of which I was not aware. However, when we met, I understood that they had already done a lot of homework on me. This was a team that was looking to challenge for the title and also competing in the AFC Champions League, so that was extremely assuring.”

Over the course of the six seasons of the Indian Super League, FC Goa has carved out a niche for being a team which likes to take the impetus in games and looks at attack as the best form of defence. And the numbers speak for themselves. The Gaurs are the only team with more than 200 goals in the competition and have made breaking goal scoring records their thing.

And Donachie already seems to be relishing the prospect. “Well, I am all for it. I think every player in the world if given the chance, would like to play an attacking brand of football and it’s the same with me. Even at Melbourne, the philosophy was the same and I feel this will be a smooth transition,” added Donachie.

Over the last few years, the Indian Super League has seen a slow influx of A-League stars. Players like Erik Paartalu, Roy Krishna and David Williams amongst others have sailed across the Indian Ocean. 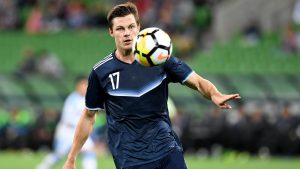 And that, in turn, has ramped up the interest about the league in Australia. “I have already taken a lot of the ISL in. A number of players have shifted base to India. Amongst them was Andy Keogh, a good friend of mine. I used to watch his games last season and found the league to be really intriguing,” exclaimed the new Gaur.

“The league is really growing by leaps and bounds. I had conversations with Erik (Paartalu) and David (Williams). They were full of praise for the league and the country. So that helped make my mind up as well. Players like Steve Taylor coming into the league really shows how well the ISL  is progressing.”

Having played in 5 editions of the AFC Champions League, James is well versed with the challenge that lies ahead for the Gaurs.

“It won’t be easy by any stretch of the imagination, but I am not fazed by that,” responded the centre-back. “The recent pandemic has caused a lot of havoc in many countries and the equations are no longer the same. We will cross that bridge when we get there.

“Australian teams have had a tough time in the competition of late due to our limited squad size. In India, the squad size is bigger and we are going to give it  a good crack.”

Ishan Pandita: I will let my play do the talking
Player Analysis – Saviour Gama, Gaurs next big thing