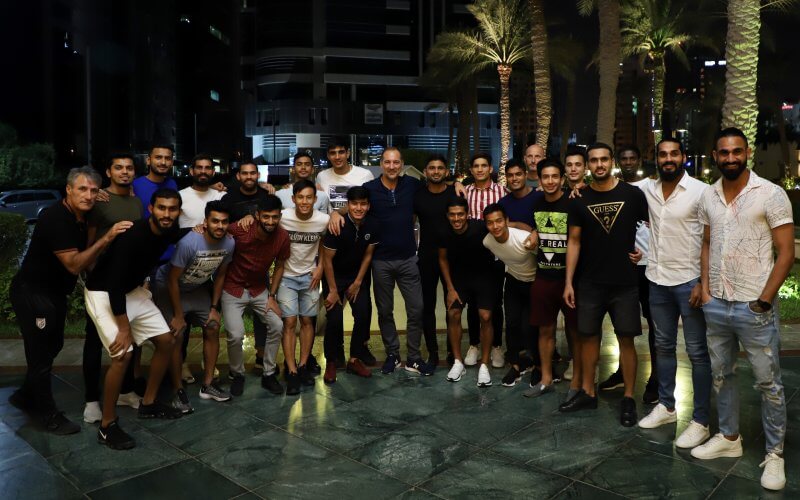 Preparations to take on Asian giants Qatar in the second match of the FIFA World Cup 2022 Qualifiers were in full swing for the Blue Tigers and with two days to go for the game, an announcement by Head Coach Igor Stimac caught the players by surprise.

“The coach told us he wants to take us out for dinner and at the time, it came as a slight surprise to us,” Gurpreet Singh Sandhu told AIFF Media Team.

“Looking back at it now I can say for sure that it had a very important impact on the whole team. Coming in from the previous match against Oman, we were still upset and angry about that result. But after the team dinner, the tide had completely turned and all of us were now completely focused on the task ahead of us,” the custodian, who wore the captain’s armband against the Asian champions, continued.

Central defender Sandesh Jhingan, who became the 27th footballer to win the Arjuna Award last month, recalled the difference in the team’s mentality after the outing and stated that there was a “complete mood change.”

“When we got on to the bus to go to the restaurant, our frame of mind was still 50-50 – on our 1-2 loss to Oman. It was still playing on our mind. But when we got on the bus to go back to the hotel, everyone had a smile on their face and the determination to succeed against Qatar. There was a complete mood change after the dinner,” he revealed.

It was on September 10 last year that the Blue Tigers held the reigning Asian champions Qatar to a memorable draw at the Jassim bin Hamad Stadium in Doha, which also made them the first side from the continent to register a clean sheet against the Maroons in the year.

Five days prior to the game, the Indian team had lost 1-2 in Guwahati to Oman — conceding twice in the last 10 minutes after taking the lead through skipper Sunil Chhetri in the first half. Centre-back Adil Khan, who featured in both games, recollected how the first game was still “pinching” all the players and how “things changed” after the outing.

“The result against Oman was pinching everyone. But the team dinner helped us refresh ourselves. Most importantly the bond between the players grew even stronger,” he said.

The 32-year-old talked about how the players bonded during their meal and how “important” it is to have such team-bonding events occasionally.

“It is important to have such activities at the right time. I remember we were all sitting on the same table and having fun. Sahal was making some funny sounds with his glass to match it with the music,” he laughed.

“We were all talking to each other. Everyone had ordered different dishes and all of us shared our food. A lot of fun and banter was exchanged. It was Pritam’s birthday as well — we cut a cake for him. All this really helped us know each other better, increased communication between junior and senior players, and made our bond stronger.”

THE POWER OF WORDS

Before the team left, Stimac called the players together for a few words — as he talked about how “proud” he was of the way they had played. Sandesh looked back at the impact of the speech and how it stirred all the players and gave them “great confidence” ahead of the game.

“The coach has always been constructive in his criticism with us. After dinner, I was pleasantly surprised by the way he spoke. He was full of appreciation and praise for the players. He told us “I am proud of you and the way you played.” Those 5-10 minutes were just him appreciating us and how happy he is to see us starting to play the way he wants us to.”

“Nobody knew that this dinner and speech would have such an impact. That’s the power of words for you. At those moments, those words gave us great confidence. When I think of the whole experience now, I feel lucky that I am a part of this highly talented group,” Sandesh expressed.

Gurpreet, who registered 11 saves in the game against Qatar, shared his thoughts on the “positivity” injected into the team by Stimac and how the “timing” of the whole evening was spot on.

All of it — the speech and dinner was timed perfectly. Our coach has played at the highest level and has been coaching for so many years at the top level. He knows how to motivate players and encourage them, and pick the right moments to do so. His presence brings a lot of confidence and positivity in the team,” he averred.

On the day of the match, the Indian side produced a memorable performance to hold Qatar to a draw, defending as a unit as well as creating opportunities on the counter to score themselves. They were buoyed on by a large number of Indian supporters in the stadium too, who cheered them along for the full 90 minutes and joined in the celebrations after the final whistle too.

Adil mentioned how the Blue Tigers proved the doubters wrong with the result and performance and displayed great character.

“When we travelled to Qatar people were saying we will lose heavily. However, we proved everyone wrong and showed our capability and strength. Each and every player showed great character. All-in-all, after the game we thought that we have the strength to compete against the best. We have to play together, follow the game plan and execute it correctly,” he pronounced.

Looking back at the game, his defensive partner Sandesh touched upon the mood in the dressing room prior to the match and laid emphasis on the unity displayed by the players on the pitch.

“We were fired up for the match and all of us were like – let’s show how good we are. When I will look back at this game some 20 years later, I will not recollect any individual performance. The only thing that would come to my mind will be  — it was 11 players playing as one soul. As a defender, I could see the whole game in front of me. I vividly remember how we shifted our shape and how the midfielders and wingers were in great sync,” Jhingan maintained.

Jorge Ortiz: Looking to dazzle in the FC Goa shirt
‘Every minute went by like an hour’: Sunil Chhetri looks back at ‘sweet’ Qatar result