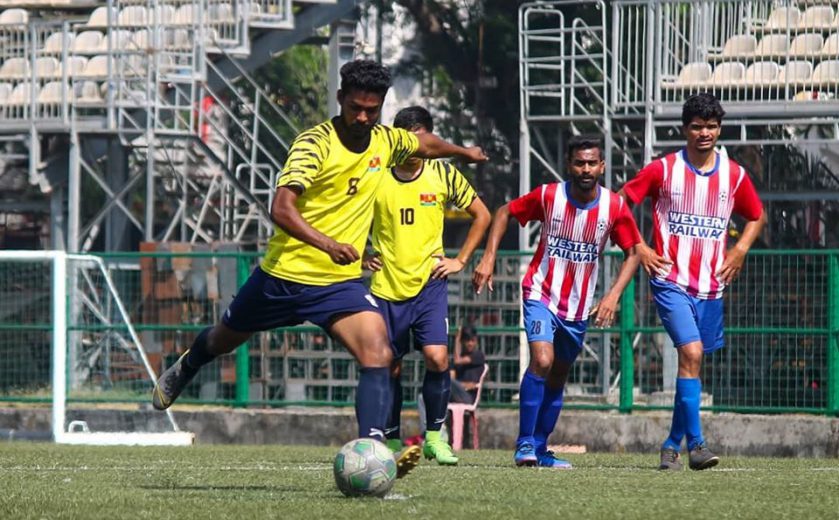 An inspired 2nd half performance saw Iron Born come from goal down to register a 3-1 win over RSP Spartans while Dinesh Singh brace helps Century Rayon down Western Railway.

Goals at either side of the break ensured that Century Rayon went away with all three points in the Elite Division encounter against Western Railway played out at Cooperage Stadium on Thursday.

In what turned out to be a dominating game from century Rayon it turned out to be story of three penalties. In the thirteenth minute of the game, a deep cross from the right caused a foul from Raju inside the box as he fell over Century striker on his attempt to clear the ball. The referee awarded a penalty for it which Dinesh Singh stepped up to take. A clean hit from Dinesh to the right corner with the keeper diving the other way meant Century took the early lead.

As the game wore on the match turned cagey as neither side managed to create any other clear cut chances. In the second half, Century Rayon won their second penalty of the day after a hand ball inside the box. However Thotchan Vashum’s attempt was brilliantly saved by WR custodian Jugroop Singh to keep his side still in the game.

However another handball inside the box later on in the game meant referee awarding a third penalty for Century Rayon. Once again Dinesh Singh stepped up for it and with cool and calm finish doubled the lead as Century Rayon went on to win the game 2-0.

Meanwhile at Mumbai football Arena, Iron Born CFCI faced off against RSF Spartans in an Elite Division game. Spartans started out brightly and looked at ease on the ball in the first half as Mahadev Mundantre opened the scoring close to the first half break to put RSF Spartans at lead.

On restart, Iron Born CFCI came out with intent as they put men forward in search of equalizer. It didn’t take long for Iron Born to draw level when Armash Ansari’s strike found the back of the net in the 54th minute. With momentum on their side, Iron Born grabbed the second of the day when Rudolf D’souza doubled the lead within three minutes of equalizer. Stung by the double strike RSF found it difficult to make a comeback and so Iron Born capitalized once again with the third goal of the day after Leander Gonsalves’s 86th minute strike put the game to bed.