Kalyani, October 11, 2020: FC Bengaluru United picked up three points in the Hero I-League Qualifiers 2020 with a hard-fought 1-0 win over Garhwal FC at the Kalyani Stadium on Sunday (October 11, 2020). Both sides came into the match on the back of defeats in the opening round of the competition and it was Ghana international William Opoku’s goal in the eighth minute that proved to be the difference between the two teams in the end.

After a tense start, the first half came to life towards the end with both teams creating a flurry of chances but at the breather, it was the side from Bengaluru that led by one goal.

It could have been 1-0 in the very first minute as Robert Primus volleyed a shot at goal after a melee from a corner kick but his shot could only ruffle the side netting.

In the eighth minute though, Bengaluru United went ahead through Opoku after a quality piece of play. Midfielder Arun Kumar played in Ronaldo Oliveira with a delightful through-ball that cut the Garhwal FC defence wide open and the Goan’s one-on-one effort was saved by the keeper Sayak Barai. However, Opoku was on hand to convert the rebound as he controlled the loose ball and slammed it into the back of the net.

Richard Hood’s side continued to dominate possession as Garhwal struggled to string passes together in their own half and get past Bengaluru United’s high press. They gave the ball away in dangerous positions and in the 22nd minute, it almost led to a goal as Opoku’s effort from outside the box seemed destined for the bottom corner — only to be denied by a diving Barai.

As the match wore on, Garhwal finally started to get their act together — with midfielders Bala Alhassan and Mahip Adhikari pulling the strings. They earned a number of free-kicks in attacking positions but failed to make the most of them.

With three minutes to go, Bengaluru should have doubled their lead as Naro Hari Shrestha found himself with a free header from close range through a brilliant cross whipped in by Vignesh. However, he could only direct it towards the keeper, who collected the ball with a big sigh of relief.

Immediately at the other end, Garhwal were inches away from equalizing — with Uttam Rai keeping the ball in the penalty area and laying it off to Victor Philip, who cut in from the right side and curled the ball towards goal, only to see it hit the crossbar and return into play. 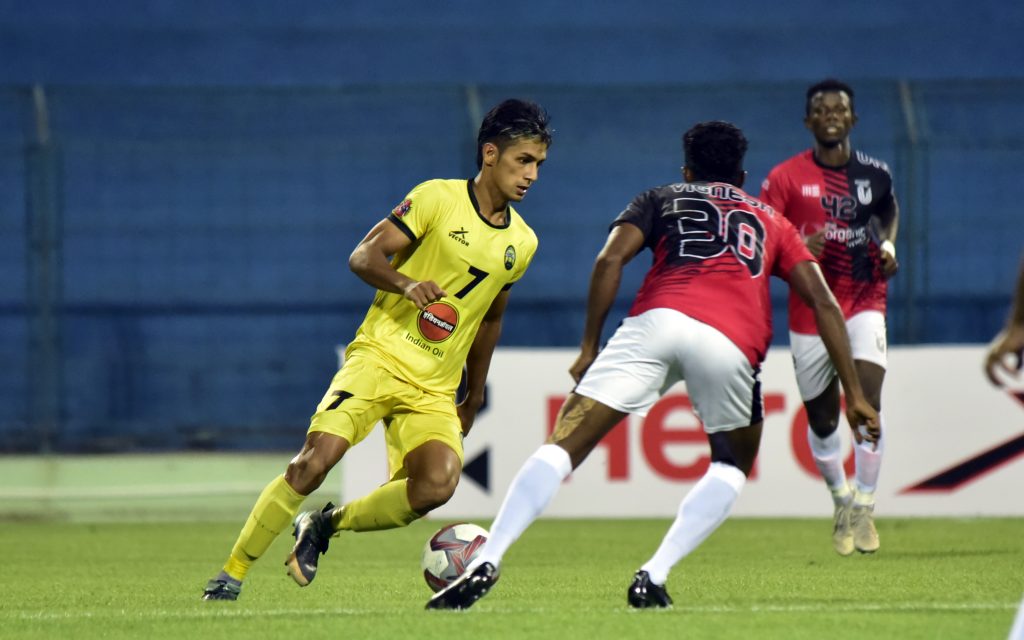 Vikas Rawat’s side had another golden chance to even the scores as Bala drilled in a powerful free-kick at goal from 25 yards in first-half stoppage time. The keeper Kunzang Bhutia parried it away but it fell straight to an onrushing Neeraj Bhandari, who fluffed his lines and skied his shot.

After the restart, both teams continued to press for advantage in midfield with chances few and far between. At the hour mark, Mahip showed some delightful footwork down the right flank to beat his marker and sent in an inviting cross for Uttam, who attempted a diving header but couldn’t connect properly.

Garhwal kept up the pressure but were almost caught out on the break as Amey Ranawade found Opoku with a cross from the right wing but the Ghanain couldn’t bring the ball under his control as he overran it.

The side in yellow continued to press for their first goal of the tournament, holding the ball better and looking to create trouble. However, they found it difficult to penetrate the Bengaluru defence and were limited to shots from distance, with Muhammed Shafeer coming closest in the 83rd minute from a long-range free-kick.

In the end, Bengaluru held on to their lead comfortably and as a result, moved up the points table with their first win of the tournament. They return to Kalyani for their next match on Wednesday (October 14, 2020) against ARA FC while Garhwal FC will take on Bhawanipore FC, who defeated FCBU in their opener, at the VYBK, Kolkata at 12.30 PM IST on the same day.

After the match, FC Bengaluru United head coach Richard Hood stated, “We were disappointed after the previous result and it was important for us to prove to ourselves that we can fight and play out a tough game. Securing three points gives us a strong ray of hope ahead of the upcoming fixtures.”

Garhwal FC head coach Vikas Rawat said, “In both our matches, we have been very close to scoring and I will sit with my players and discuss how we can improve our finishing. We still have two games to go and six points to get. We will give everything to win those six points.”

Young Rijal scores two on debut as Mohammedan cruise to a 4-1 victory
It’s not over till it’s over, says IFA Secretary Joydeep Mukherjee