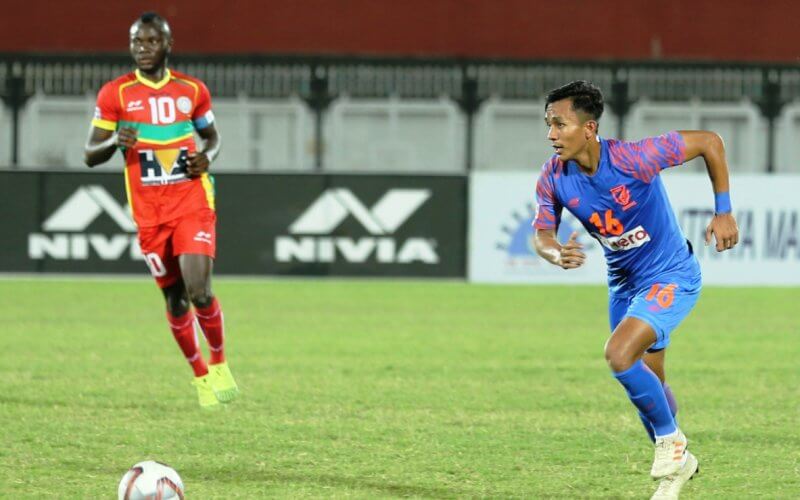 On Thursday (October 8, 2020), 17-year-old defender Bikash Yumnam was named in the Guardian’s prestigious NextGen 2020 list, which features 60 of the best young talents in world football born in 2003.

He became the first Indian to feature in the annual publication and according to Venkatesh Shanmugam, under whom he played for the Indian Arrows in the Hero I-League 2019-20, his selection is a “big message” for the future and termed it as “positive pressure.”

“This is not a time to celebrate. In fact, it is a positive pressure for Bikash to take himself to the next level. It’s a big message for him to keep working harder and keep growing. I wish him all the best and hope to see him progress in the coming years. I see him as a future defender for the National Team,” Venkatesh told the AIFF Media.

The list features the top talent from across the globe and in recent editions, it has featured the likes of Marcus Rashford, Gianluigi Donnarumma, Vinicius Jr, Erling Braut Haaland and Alphonso Davies — all of whom are now International-level superstars. Featuring in such elite company can be a daunting prospect but Bikash’s former India U-16 coach Bibiano Fernandes feels confident that the young gun will “live up” to the increased expectations.

“Bikash is on the right path for sure. Having seen him from close, his attitude both on and off the field is very good and I have no doubt that he will live up to the expectations. Technically, he is very good — you hardly find centre-backs who are so comfortable on the ball. His physique is another advantage. He can go very far in the future in Indian football and if he wants to play in Europe or any other place abroad, he can make it,” Bibiano maintained.

‘BRIGHT FUTURE AHEAD OF HIM’

After impressing at the junior level, Bikash made the step up to the professional game with the AIFF’s developmental team Indian Arrows in the 2019-20 season — featuring nine times and also wearing the captain’s armband on one occasion. His coach at the Arrows, Venkatesh, mentioned that his “commitment” caught his eye and allowed him to settle into the team seamlessly.

“Bikash joined the team a few matches into the season but he adapted very quickly to our system, thanks to his tremendous commitment levels. He reads the game very well and shows maturity and confidence beyond his years. I feel joining the Arrows was the best decision for him and he proved himself there,” Venkatesh said.

A former India international and AIFF Player of the Year, Venkatesh compared the 17-year-old to two former Blue Tigers defenders who hail from Manipur — same as Bikash.

“Manipur is known for producing many quality players but most of them are attackers. After Gouramangi Singh, he is the first defender from the state who I have seen that can play at that level. His playing style — technically astute and composed with the ball — also reminds me of Ratan Singh, who was another excellent defender for India. Bikash has a bright future ahead of him and with hard work, discipline and game-time, he can develop into a future star.”

‘MISSED HIM IN AFC U-16 QUARTERFINALS’

The youngster was an important member in the Indian side that reached the quarterfinals of the AFC U-16 Championships in 2018 under Bibiano’s leadership, where they progressed past the group stage keeping three clean sheets in three matches. Bikash was a key figure in the starting line-up in the tournament but he missed the quarterfinal against South Korea due to suspension.

“At the AFC U-16 Championship, he was one of the first names on the team sheet. He grew with every game he played as we made it to the last eight. He was important for one more quality — his long throws, which was as good as a corner or cross for us. We missed him in the quarterfinals as he always gave us an advantage and if he was there, perhaps it could have been a different story,” Bibiano recalled.

The Head Coach also recollected Bikash’s early days in the National Camp and how his “hunger” to improve helped him transform into a vital part of the team.

Bibiano stated: “When he joined the National Camp for the first time, he was struggling a bit to match the intensity levels in training. However, I could see that he was technically advanced and he had the hunger to play in the national team. Gradually, he adapted to our training and after 1-2 months, he became a starting XI player for almost all matches.”