Kalyani, October 14, 2020: Gujarat-based ARA FC and FC Bengaluru United played out a pulsating 1-1 draw in the Hero I-League Qualifiers 2020 at the Kalyani Stadium on Wednesday (October 14, 2020). It seemed that forward Pratik Swami’s strike would prove to be the difference between the two sides but substitute Asrar Rehber successfully converted from the spot with the game’s last kick to rescue a point for Bengaluru United.

Both teams came into the match on the back of contrasting results, with Bengaluru United defeating Garhwal FC by one goal in their last game while ARA suffered a deflating 4-1 loss against Mohammedan Sporting. However, it was the side from Gujarat that went into the breather with the lead — thanks to Swami’s goal in the 36th minute.

Vivek Nagul’s side started brightly, with Stanley Eze posing danger with a deft through-ball in the 10th minute. However, it was snuffed out just in the nick of time by keeper Kunzang Bhutia. The Nigerian then had a scoring opportunity in the next minute with a close-range free-kick but his shot flew just over the bar.

Midfielder Jordan Fernandes came close for ARA in the 16th minute as well, shooting powerfully from distance but his effort was deflected and landed on the roof of the FCBU net.

Wearing the captain’s armband for Bengaluru United was forward Azharuddin Mallick and he was presented with his team’s best chance of the half in the 19th minute. Collecting the ball inside the box, he turned his marker and fired a shot straight towards ARA custodian Melroy Fernandes who collected comfortably at his near post.

As both teams tussled for supremacy, ARA took the lead through a splendid goal from local Ahmedabad lad Pratik Swamy. A blocked shot from Jordan fell to Swami, who cut inside the defender with an excellent feint and saw his powerful shot take a wicked deflection to fly past Bhutia in goal.

FCBU head coach Richard Hood made two changes at the break, bringing in Akhil P and Aditya Mohan as his side looked to make their way into the match. In the 53rd minute, they came close through William Opoku, who had scored the winning goal against Garhwal as well, but his shot from a narrow angle could only hit the side netting. 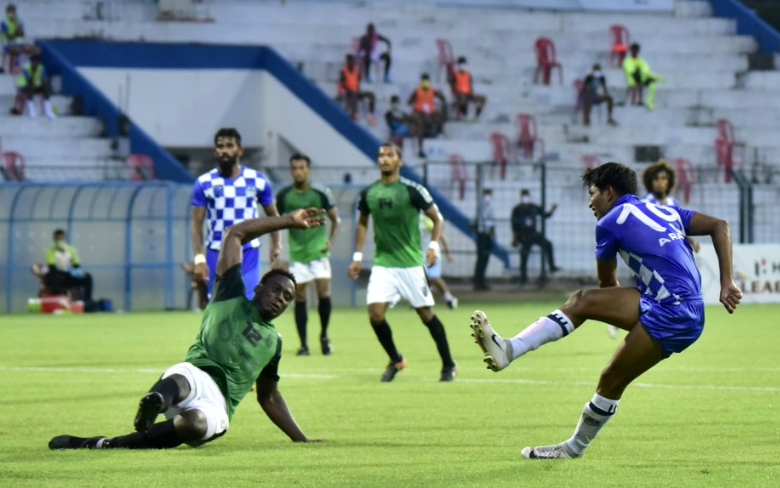 The Ghanaian had another golden opportunity with 20 minutes to go as he played in Amey Ranawade with a pinpoint through ball. The full-back cut the ball back to Opoku at the edge of the area but he scuffed his first-time shot as it sailed well over the goal. He had another similar chance in the 76th minute via a cross from the left side by Aditya Mohan but yet again, his shot was skied over the target.

As the final whistle came closer, tension levels in the Bengaluru side continued to rise as they relentlessly pursued the leveller but could not create a concrete chance. They continued to commit men forward and in the 84th minute, Robert Primus headed a long throw-in dangerously across the ARA goal but none of his teammates followed up at the far post and the chance went begging.

ARA, who had shipped four goals against a rampant Mohammedan Sporting in their last game, showed great grit to hold firm and defended in numbers as they tried to maintain the clean sheet. However, in the last minute of five minutes of added time, heartbreak was to follow for the Gujarati side as FCBU substitute Jaison Vaz was brought down by keeper Melroy — with the referee pointing to the spot.

Rehber found the back of the net from 12 yards as both sides split a point each. As a result, ARA picked up their first point after two games while Bengaluru United stay third on the table with four points — two behind league leaders Mohammedan SC and Bhawanipore FC, who had beaten Garhwal FC 2-1 in the first match of the day.

ARA will now face Garhwal FC in Kalyani on Friday (October 16, 2020) while FC Bengaluru will be in action next on the final matchday on Monday (October 19, 2020) against Mohammedan SC.

After the match, ARA FC head coach Vivek Nagul stated, “The result feels like two points lost, definitely. It was a great game and I am proud of the way my players played. We stuck to our tactics and it worked as our wingers really made life difficult for the wingbacks. Mathematically, we can still make it to the top spot and I still believe in our chances.”

FCBU head coach Richard Hood said, “After conceding the goal, we played good quality football. We pressed hard and kept the ball well but you don’t get points for that. We need to look at our performance with a cool head and prepare for our final game. We’re not getting into the mathematics of the points table. For us, we want to play the last match with our heads up.”