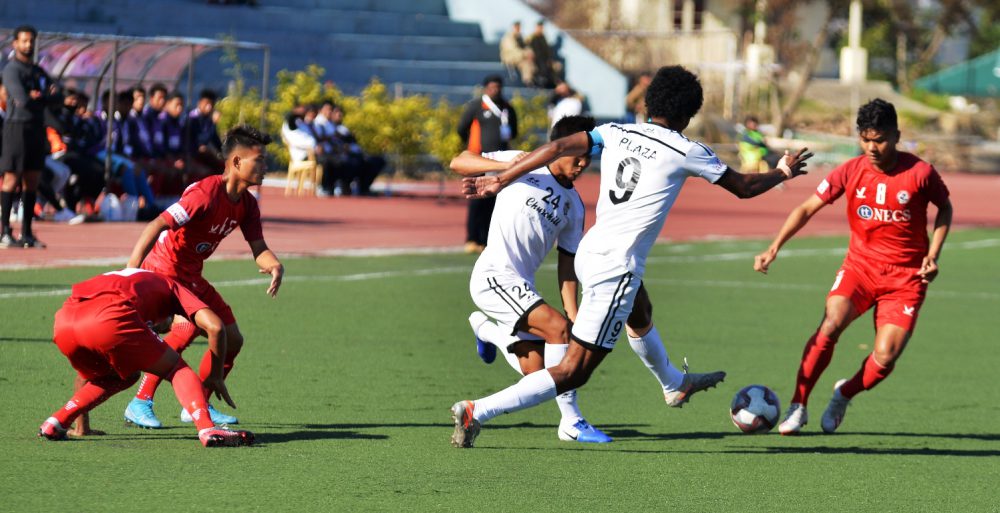 The match ended in a hard-fought 2-2 draw, much to the disappointment of the home crowd who were there to witness a potential first home win of the season. With the draw, Aizawl FC are placed fifth on the points table with nine points from seven games whereas Churchill Brothers go to the top of the charts with 10 points from five matches.

Aizawl FC started with a few new names in the line-up today which saw the inclusion of the January transfer import Ramhlunchhunga. There was another change which was seen in the form of Lalrosanga who was playing in the position of Joseph Adjei who was out due to his suspension in the last match against Gokulam Kerala FC.

The match started on a slow note as neither team looked dominant from the onset. The first major moment came in the 29th minute with a set-piece from Kalif Alhassan of Churchill Brothers. His dipping strike at the goal was going to find the lower right corner of the net when the Aizawl keeper carrying his form from the last match made a diving save to his right. Churchill Brothers again got a chance with a free shot for Vinil Poojary soon after but his strike from inside the box just went wide.

The moment of reckoning finally came in the 44th minute as a low cross from the right flank by Joe Zoherliana was foiled by the away keeper and it fell to Aizawl’s Abdoulaye Kanoute who made no mistake and tapped the ball into the net from close range. Aizawl went into half-time leading 1-0.

The second half resumed and it had a different flavour to it. Churchill Brothers came out with more attacking intent and looked sharper. Another factor was also the introduction of Israil Gurung — their set-piece expert at half-time who proved his worth immediately.

In the 64th minute, Israil got a free-kick from the right side of the Aizawl box and produced a dangerous curling strike which produced a save from the home team’s keeper but he couldn’t control it and the loose ball was finally tapped in Robert Jr. Primus to level the score at 1-1.

Both teams were now trying to score the winning goal but Aizawl fell behind in the 78th minute as a poor defensive clearance by the team resulted in a close-range strike by Vinil Poojary giving the away team a 2-1 lead.

The onus was now on Aizawl and on a day when the Churchill goalkeeper wasn’t at his best, they fancied their chances of a comeback. In the 80th minute, a cross from the left side of the box was spilt by the Churchill keeper and the ball landed for an easy tap in at the feet of Isak Vanlalruatfela. He made no mistake and smashed the ball in the back of the net levelling the score at 2-2.

In the dying moments of the match, both teams tried to score a goal but none could create a clear chance. The match ended with the scores level, which also marks the fourth consecutive draw for Aizawl FC at home.

Isak Vanlalruatfela from Aizawl FC walked away with the Hero of the Match award.