On 21st June 2020, Miners SC celebrated their 50th anniversary of existence in Mumbai Football circuit, footballcounter takes a look back on the Chembur based club journey spanning 5 decades.

Part 1 of this 2 part series dwelled into clubs origin, its entry into Mumbai League and its golden phase.

In this Part 2 of 50 years of Miners SC – Reliving the journey, Footballcounter takes a glance at club’s journey in the 21st century, introduction of 2nd team and their community service.

A period of decline followed during the late 90’s, where the club would often found themselves struggling in the relegation zone that led to Miners SC soon falling off the Mumbai Football pyramid. But in the 1999-2000 season, Miners SC came back strong by winning promotion back to 1st division. Youngsters Ramzan Sheikh and Ozzy Thomas would led the club up front as Miners SC would go on to become a formidable team with regular presence in 1st Division. The club would also return to winning the inter Parish Chembur trophies picking up 9 titles overs the years.

The dawn of new century saw plenty of Ex-miners players come out to boost the club. Abu Salim of Kakson Industries, would provide the financial support as the club plied its trade in 1st division. While others like C.K.Shetty of BPCL and Pravin Mendon too gave a helping hand to the club. In this time period, the club developed several players like Ozy Thomas, Mohd Kalander, Zubin Dinesh, Samuel Bangera and goal scoring machines Arul Nadar and Akshay Shetty.

In 2009, CK Shetty suggested to Miners administrators – Ramzan Shaikh, Ozy Thomas and Tozy Thomas, to add one more team in MDFA league, so that more club players would get a chance to play in competitive environment. And so Miners SC soon had two teams playing in MDFA Leagues. While the main team Miners SC (A) played in 1st Division the second team Miners SC (B) would start their campaign in MDFA 3rd Division.

The Miners SC (B) team were no pushover either as they would go on to show their opponents in the following season a dominating performance to win promotion to 2nd division. In the last decade Miners SC have consistently had two teams playing in MDFA league – 1st and 2nd division. The new Crop of players included the likes of Nitesh Aswani, who went on to play for KENKRE in Mumbai Elite Division and now currently plays for I league side Minerva Punjab.

Miners SC would also go on to regular play in ‘The New generation Rink football tournament’ held in Chembur and started in the year 2014 under the name Chembur festival. The tournament saw Miners at its dominating best as they went on to win 3 Chembur festival titles. 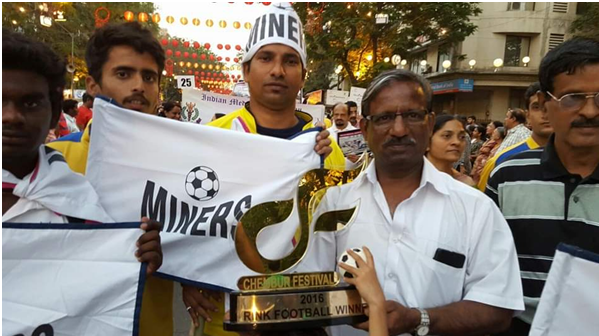 The club has played a vital role in providing essential learning experience for young kids by organising Summer Camps over the years. The administrative assistance provided by ex-miner players like Ramzan Shaikh, Tozy Thomas and Ozy Thomas guided by Pravin Menden, C.K. Shetty, Joy deep Mukherjee of IMCO have kept Miners running and still going strong. The financial aid from Abu Salim – owner of Kakson Industries has played instrumental role in helping the smooth running of the club.  In the last 4 years, Miners have gone on to field 3 teams in the MDFA league with one club each in 1st, 2nd and 3rd Division.

Miners FC has founds players who came to play and represented them and supporters who have helped in administration, the club aims to continue to do so and grow more as Ramzan Sheikh puts it, ”Future of Miners FC is to become a complete private professional club with emphasis on training youngsters.”