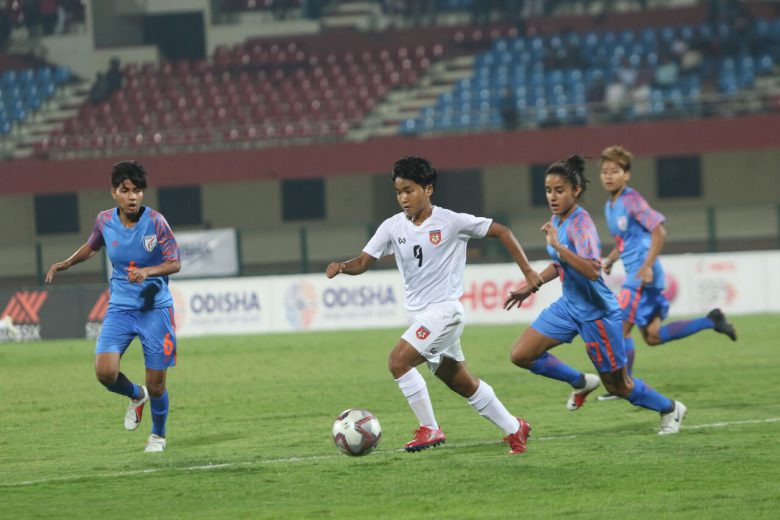 MANDALAY (MYANMAR), 2nd April, 2019 : Ahead of Indian Senior Women’s Team’s opening match of the AFC Olympic Qualifiers Round 2 against Indonesia at the Mandalarthiri Stadium, Head Coach Maymol Rocky dubbed the clash as “mental litmus test for her team with incredibly high stakes.”

Speaking at the official pre-tournament press conference, Maymol stated: “We had played two friendly matches against Indonesia in January, and they (Indonesia) showed that they can be tough opponents.” The Indian women has played 14 international matches before coming to Myanmar, including two matches against Indonesia where India won 3-0, and 2-0 in Jakarta in January 2019.

“The fact that we had won the two matches makes it harder for us mentally. We cannot underestimate them, and take it for granted that we shall beat them this time as well,” Maymol cautions. “The stakes are incredibly high tomorrow (April 3) and it will be a litmus test for us mentally. We need to be mentally strong, and aggressive.”

“Every team will want to start the Olympic Qualifiers Round 2 with a win, and so do we. A win in the first match will put us in a good position for qualification, which we are aiming for.”

Meanwhile, skipper Ashalata Devi informed that the team is ready to meet challenges head-on. “We are aiming to qualify to Round 3. We are extremely glad to have accumulated the exposure, and experience through the friendly matches that we have played before coming here to Myanmar.”

The Indian women had clashed swords against the likes of Romania, Uzbekistan, Iran, Hong Kong, Kazakhstan amongst others, and all their three opponents of the AFC Olympic Qualifiers Round 2 since January 2019. “Constant competitive environment in a match setting has helped us develop our confidence. Today we are aware of our capabilities. If we play to the best of our abilities, we can defeat some of the best teams in the region,” she added.

“We are not taking Indonesia lightly at all. We need to be on the top of our game if we are to get a win. They play a fast style, and are deadly on the wings. We need to be careful of that.”

Meanwhile, the temperatures in Mandalay are predicted to soar above 40 degrees Celsius, and the match will have a cooling break for the players as well. Mincing no words, Maymol stated: “The weather cannot be our excuse, we are playing to win, and we won’t let weather dictate our goal.”

“It is what it is,” expressed Ashalata. “We are here to play football, and focus on our job.”

The kick-off on Wednesday (April 3) is slated for IST 2pm.

Also Read: The goal that changed it all for Nikhil Poojary