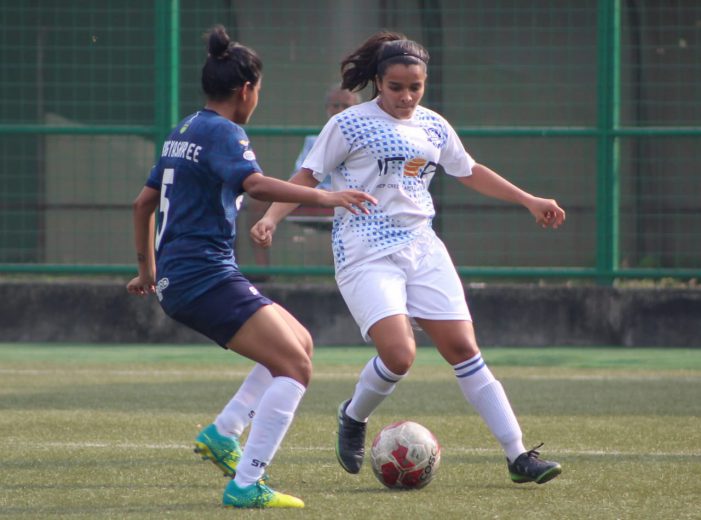 Spark FC played out an interesting draw against Samuel FA where they concluded with a 2-2 scoreline.

Jahnavi Shetty opened the netting earlier for Spark FC at the 7th minute. Her only effort created the difference between both the sides till the first half concluded. In the second half, the game intensified to a new level. Y Poojitha equalised for Samuel FA at the 53rd minute and they went on to take the lead through Mhasi Paunuo at the 56th minute. However, Samuel FA’s joy was short-lived as Spark FC bounced back within a minute. Jahnavi completed her brace and relieved Spark FC from losing 2 points. The final whistle concluded having both the teams end on equal terms. Samuel FA sits at the second position in Group B bagging 7 points from 4 games, whereas Spark FC struggle with 2 points from 3 games.

Both the teams took a lot of time to settle as they failed to break the deadlock until the first half concluded. In the second half, Sudiksha Chaturvedi opened the scoreline for Snigmay. The outfit thoroughly dominated after getting the breakthrough. Pooja Gupta of Snigmay FC was a notable mention, who created a lot of critical chances for her teammates and made attempts on goal. She finally scored past the keeper when the clock struck the 90th mark. Carrying the ball from the mid-field, she played an elusive one-two touch with her teammate and smacked the ball back into the net.

Igor Stimac: “We were the better side in the second half”
With an eye on a bigger dream, Johnson Mathews aims to take one step at a time