Igor Stimac: “We were the better side in the second half” 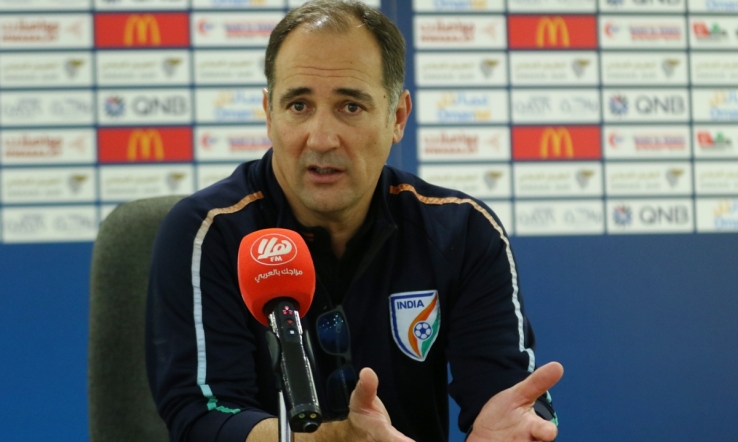 Blue Tigers head coach Igor Stimac, after the narrow 0-1 defeat to Oman in Muscat, pronounced that he wants his team to “play without fear” against any opponent they face.

“I want my India (team) to play without fear against anyone. Irrespective of whoever you are playing against, you always have a chance to win the game. We need to grab that,” Stimac stated in the post-match press conference held at the Sultan Qaboos Sports Complex in Muscat yesterday (November 19, 2019). He added, “If you are trying to change (your gameplan) according to your opponents, it shows your team’s weakness — which is the last thing I would want for my team. We stick to our system and we are working on the players’ strengths and conditioning.”

Muhsen Al Ghassani fired the solitary goal of the match in the 33rd minute for the hosts in front of a 24,000-odd-strong crowd at the picturesque stadium in the capital city of the Gulf Nation. The coach stated that India was the better team in the second half and while they have been doing good work in open play and creating opportunities to score, the lack of accuracy in the finishing is a problem they are facing.

“We were the better side in the second half but couldn’t find the way to score a goal. This is our main problem which has been haunting us always. We are moving well, we are fighting, we are doing what’s necessary but when we come inside the box, the decision making is not at par and the accuracy is not there as well. We need to get used to this, cut the numbers of mistakes down and try to get better results in the future,” he said.

The Croatian also congratulated the hosts on their win and added that his team has shown that they can compete against the likes of Oman. Stimac continued, “Congratulations to Oman. We wish them all the luck for the upcoming Gulf Cup in Qatar. Today, they had more chances, so they deserved to win. Oman is one level up compared to India but we are coming thick and fast. In the two games against them, we have shown that we can play against teams like Oman who have quality, who are physically strong as well as fast.”

India’s hope of getting a positive result from Muscat got heavily affected when Pronay Halder and Adil Khan had to be substituted inside the first 40 minutes owing to injuries. Pronay, who suffered a shoulder injury, was replaced by Vinit Rai in the 27th minute whereas the coach introduced Anas Edathodika after withdrawing Adil Khan in the 36th minute.

Stimac stated: “Today, our only player who is a tough tackler (Pronay) suffered a shoulder injury. He was the main player who could fight for the second ball and his absence killed us in the second half.” He continued, “When you are forced to make two substitutions due to injuries in the first half, it upsets the team. You need to compromise with the work which you have done before the game and it reduces your chances to tweak with your plan in the second half. Even I was hesitant to make the third change thinking of another injury which could have happened anytime. It was a big risk and we are facing this for long.”

Following this result, India’s position in the group E stays unchanged with three points from five matches. They are now scheduled to face reigning AFC Asian Cup champions Qatar at home in the return leg on March 26, 2020 in the next match of the qualifying round.