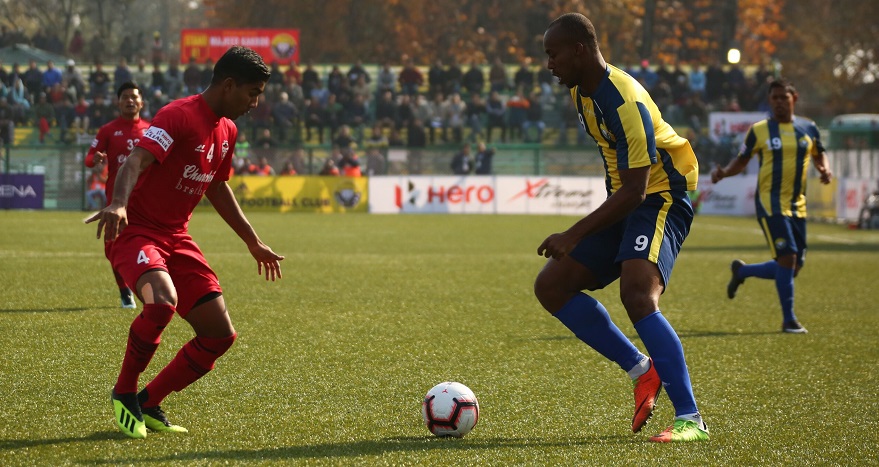 Goa, January 30, 2019: Churchill Brothers FC Goa resume their Hero I-League title chase at the Tilak Maidan in Vasco Da Gama, Goa, on Thursday, January 31, 2019, against Real Kashmir FC, who are also persistent in the title hunt in a return-leg fixture scheduled to kick-off at 5 pm IST.

Both teams shared the spoils in the first-leg match at the TRC stadium in Srinagar, with the game ending in a 0-0 stalemate.

Churchill Brothers find themselves in second position after 14 rounds, just two behind leaders Chennai City FC. A win on Thursday will be gold dust as they aspire for a third Hero I-League triumph. They are at their best this season, having been beaten only twice, have won eight matches and drawn four.

More importantly, Churchill, under the guidance of Romanian coach Petre Gigiu, have demonstrated some attractive football and apart from Plaza’s sublime goal-scoring form, Gambian playmaker Dawda Cessay has also been in excellent touch this season.

Both the teams, Churchill Brothers and I-League debutants Real Kashmir FC are on 28 points each from 14 matches, but the Goan team is in the second spot because of a higher goal difference.

Churchill have scored 26 goals this season and are the second highest goal-scoring team after Chennai City, who lead with 31 goals.

According to Churchill Brothers coach Petre Gigiu, “Every game is very important because if we lose any game right now, we will be out of the title race. We need to be in the fight and our next match is going to be a tough match.”

I-League debutants, Real Kashmir, are also very competitive defensively and have not tasted defeat in the last couple of months owing to clever strategic switches in the team brought about by their Scottish coach David Robertson.

They will, however, miss the services of Ivorian Gnohere Krizo, who scored the winner in the last games against Chennai and has been an important influence in their attack. On asked about Krizo, Robertson mentioned, “Krizo has been suspended so it can affect the game.”

“In our last match, we overpowered Chennai but tomorrow’s game will be difficult. We are focusing on one game at a time. We always try to give our best. Churchill is a good team to play against. The next six matches will be difficult as all the top teams are good,” coach Robertson added.

That second win over Chennai by Kashmir has thrown the 12th Hero I-League wide title race open. Kashmir have conceded only seven goals so far, with eight clean sheets. They are the best defensive side in the league and they have proven that again and again. Churchill Brothers, on the other hand, have impressed one and all with their relentless attacking displays and as a result, it is set up for a cracker at the Tilak Maidan.