“The job is not done yet,” says India U-16 Head Coach Bibiano Fernandes 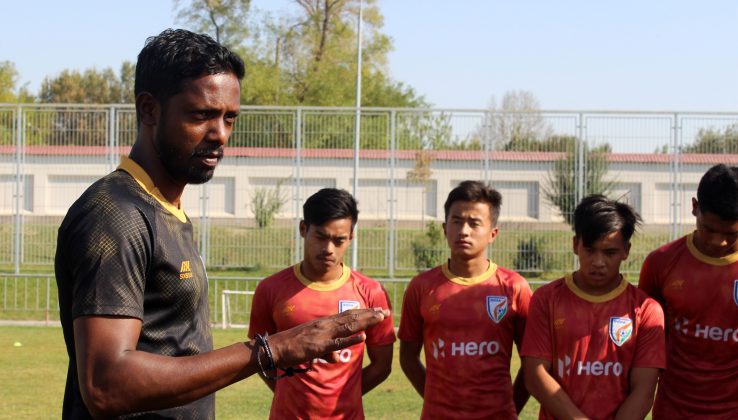 Building on the 13 game winning streak, the Blue Colts have scored 10 goals from 2 matches and conceded none on their two U-16 AFC Championship Qualifiers campaign so far.

Such dominance in the Asian level may well be a positive sign for the upcoming future. However, “the job is not done yet,” says India U-16 Head Coach Bibiano Fernandes. The Indian U-16 boys 90 minutes behind from a direct qualification to the AFC U-16 Finals to be held in Bahrain next year.

The U-16 boys have won against Turkmenistan, and Bahrain by identical 5-0 margins, and that has put them at a goal difference of +10. In contrast, Uzbekistan has defeated Bahrain 3-1, and overcome Turkmenistan 3-2. That has put them on six points, but at a goal difference of +3. So even a draw against hosts and Asian powerhouses Uzbekistan would suffice.

As per the regulations, the 11 group winners, and the 4 best second-placed teams will make it to the Finals, with Bahrain being automatic entrants on the virtue of being the hosts.

“We have had two good results. We need to go into the last game against Uzbekistan with the same attitude,” said Fernandes. “A draw is never in our mind.”

“We want to win it and come out of the group with nine points. We had set an objective of winning all three games in the group, before coming here, and we intend to fulfil that objective, regardless of what the equations are.” Since 2011, the India U-16 National Teams have made it to the AFC finals on three occasions – in 2011, 2015, and 2017.

The match is scheduled to kick-off at the JAR Stadium in Tashkent which is considered as the Fortress of the Uzbekistan National Teams at IST 4.30pm tomorrow (September 22, 2019).

Bibiano’s boys are all part of AIFF’s youth development set-up which is based in Goa. The colts have been on a fiery run over the last couple of months, a run that has seen them win 13 matches on the trot, with victories earned in Thailand, the SAFF U-15 Championship in India, two friendlies in Turkey (including a 6-3 win against Turkish giants Fenerbahce FK), followed by the decimation of Turkmenistan and Bahrain in the AFC U-16 Qualifiers.

Bibiano’s rival counterpart Azamat Abduraimov maintained “India are a strong team.” “It’s evident in the manner they play. Despite playing at home, we will respect them. We will go out to secure a victory, but that won’t be easy. It will be an interesting match,” Azamat stated.

“Uzbekistan is the home side. That’s an added advantage for them,” Bibiano maintained. “We have come here with experience of exposure tours in Italy, Thailand, and Turkey, and also the SAFF Championship back home,” he added. “But playing at home, having the support of the crowd behind your back does make a lot of difference.”

Bibiano has been regarded as the ‘Man with the Midas touch’ having guided India U-16 to the quarterfinals of the AFC U-16 finals in 2018 where they were a match away from a direct qualification to the FIFA U-17 World Cup.