Narender credits Mahesh Gawli for making him a better player 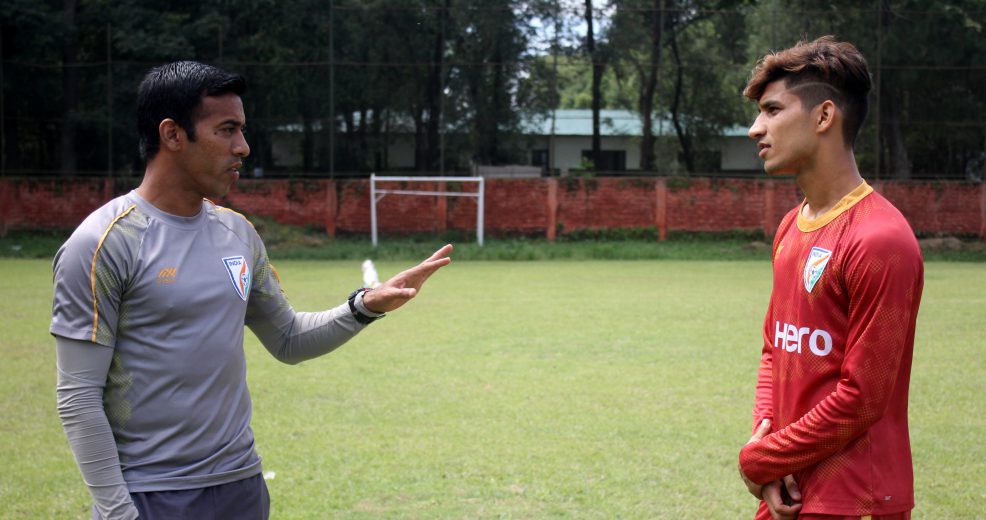 Against the backdrop of the Indian U-19 boys making all dream big, the fact that former Indian defender & the current Assistant Coach of squad Mahesh Gawli has silently been “working on the basics” has almost gone unnoticed.

“The ultimate aim is to develop these players technically,” Gawli states. “Hence, I always focus on the basics. After all, one can only become a better player if the basics are rock solid. I bring them into game situations, and assess their performance and decision-making,” he informs, on the sidelines of the SAFF U-18 Championship.

One of Gawli’s trainees, Narender Gahlot is already with the Senior Team, the icing on the cake being his header against Syria in the Hero Intercontinental Cup in Ahmedabad earlier this year.

“At the senior camp, all players always ask me about my training experience under Mahesh-sir. I am privileged to have him as my coach. He is so patient. I always rush to take help from him. He is always working on my passing, positioning, organizing the defence,” Narender quips.

“Narender is a promising defender. He is talented, and has a good attitude on and off the field. I have been working with him from the Indian Arrows, and he has been developing very fast. Whatever I teach him, he picks up very fast,” Gawli, one of India’s best-ever defender since the 1990s, certifies.

“After going to the National Team, he has raised his level. He understands that  he needs to continue improving. The U-19 boys are watching him as he is representing the Senior team. It’s time for Narender to lead by example,” Gawli goes on.

“He has to improve the other players by continuously improving himself. He has learnt a lot being with the Senior team. I hope he keeps doing better and serves as a role model for the others.”

Narender admitted that “Mahesh Sir’s inputs have always proved invaluable.” “He is such a legend. He won the best defender award 5 times in his career (in the I-League). His precision, and decision making is something I aim to emulate,” Narender comments.

“He is so meticulous. He is so fast to point out our minor errors. He is such a hard taskmaster. He corrects then every training session, and match. We do video analysis of our sessions together, and he explains to us where we need to improve,” Narender explains.

“The job is not done yet,” says India U-16 Head Coach Bibiano Fernandes
India U-18 Boys gear up for Bangladesh Challenge