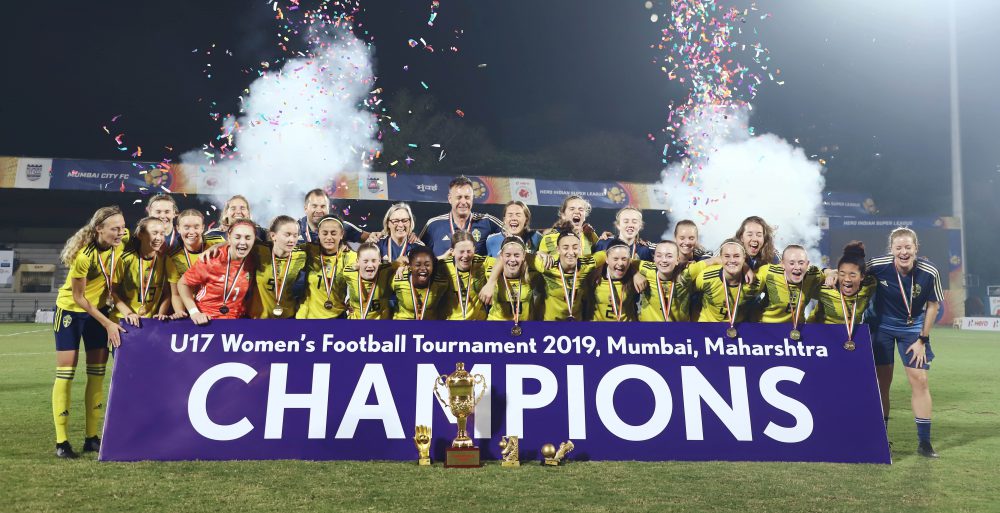 MUMBAI: Sweden clinched victory in the final of the U17 Women’s Football Tournament 2019 with a 4-0 win against hosts India on Thursday (December 19, 2019) at the Mumbai Football Arena.

The Swedes took the lead as early as the fourth minute through Rusul Kafaji, who struck a shot from outside the penalty box that hit the back of the net. The hosts looked to strike back as Sumati Kumari looked to cause danger down the left flank. But the visitors were not to be troubled. However, Sweden extended their lead in the 16th minute following a corner – Rusul’s corner being headed in by skipper Elma Nelhage.

Two minutes later, the Swedish girls added a third through Evelina Duljan, who raced down the right flank, got into the box and shot across to score. In the 20th minute, the away side threatened again through Monica Bah, who latched on to an aerial through ball and ran into the penalty area. She fired in a powerful shot but India keeper Manju Ganjhu was equal to it – diving low to thwart it away.

Changing over, India created the first attack. Wing back Jyoti Kumari curled in a cross from her flank that evaded an onrushing Lynda Kom and was collected by the Swedish custodian Elin Svahn. Manju was called into action once again a few minutes from the hour mark as she saved a low shot from the left side of the penalty area, which was eventually cleared away for a corner.

In the 61st minute, Sweden earned a penalty kick for a foul inside the box but the resulting effort was skied over the bar by Matilda Vinberg. The European side, though, made it four through Monica as she met a cross from the right and the ball hit the post and went into the goal.

The award-winners at the end of the tournament are as follows:

Aizawl host Punjab FC in the first match of Round 5
Lots at stake as Chennaiyin, Kerala Blasters look to iron out final minute blushes