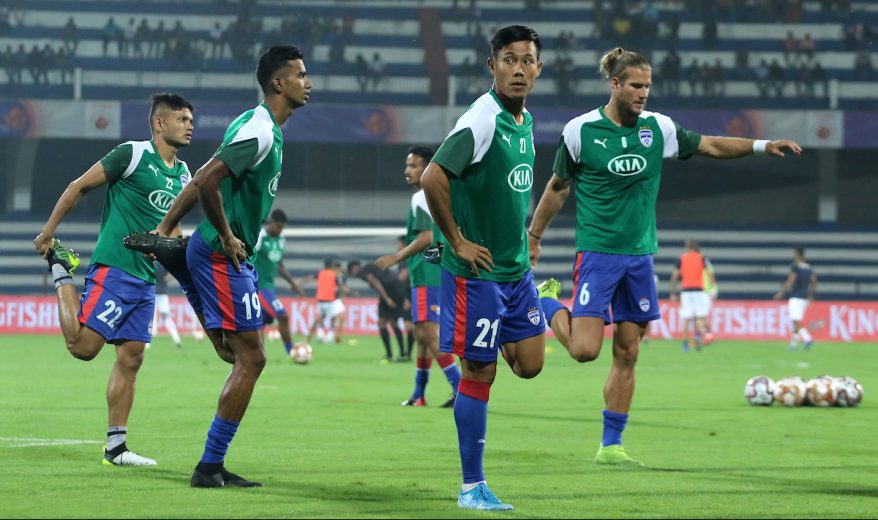 Defending champions Bengaluru FC will look to pick up their third win on the trot when they go up against new entrants Hyderabad FC at the GMC Balayogi Athletic Stadium here on Thursday.

After registering three draws in their first three matches, Carles Cuadrat’s men defeated rivals Chennaiyin FC 3-0 and Kerala Blasters 1-0 to get their title defence back on track.

Up next for them is a struggling Hyderabad side away from home, a proposition Cuadrat believes will not be easy. Phil Brown’s side is at the bottom of the standings with three points from five matches, which includes one win and four defeats so far.

“Hyderabad need the points, so it’s going to be a tough game for us. Especially after you lose a game in the manner that they did, you want to come back from it and be focused so they are going to be better than they were before,” said Cuadrat said ahead of the game.

His opposite number Phil Brown did admit that Hyderabad were feeling the pressure but trusts his team to perform. “We do not deserve to be where we are in the league table. However, if we keep on working hard and put honest performances, things will change. We are feeling the pressure as we are 10th. But all I can ask is that the boys give their 100% while they are representing the club,” said Brown.

The game against the Blues will be Hyderabad’s most difficult yet, considering both teams’ defensive records. The unbeaten Bengaluru side has conceded just one goal and that too not from open play and have the most number of clean sheets in the sixth season of ISL. On the other hand, not only has a side managed by Brown failed to keep a clean sheet in ISL, but Hyderabad have also conceded a league-high 12 goals in five matches.

Bengaluru midfielder Dimas Delgado, after failing to make the desired impact in the first three games, has found his rhythm in the last two matches with two assists to his name. Skipper Sunil Chhetri, who started the season playing as a left-winger supporting Manuel Onwu, played centrally and scored a goal each in the last two games.

“When you are one of the best strikers in the country, you have to contribute a lot to the team and the team will be reliant on you. Chhetri has scored twice already and he’s always getting into good positions and I’m happy with his performances,” said the Bengaluru coach.

Hyderabad, who have scored just one goal from open play this season, are reliant on Marcelinho to produce the goods in front of goal. The likes of Bobo, Marko Stankovic and Robin Singh will be expected to step up and deliver with the team desperately looking for three points. Their only win this season came against Kerala Blasters at home and Brown needs the tables to be turned sooner rather than later.

“We have the utmost respect for Bengaluru. They showed last season what they can do. The consistency of Bengaluru is something great. They are being able to pick the same consistently, the same strike force, but we have not been able to do that yet. We have to find ourselves,” said Brown.