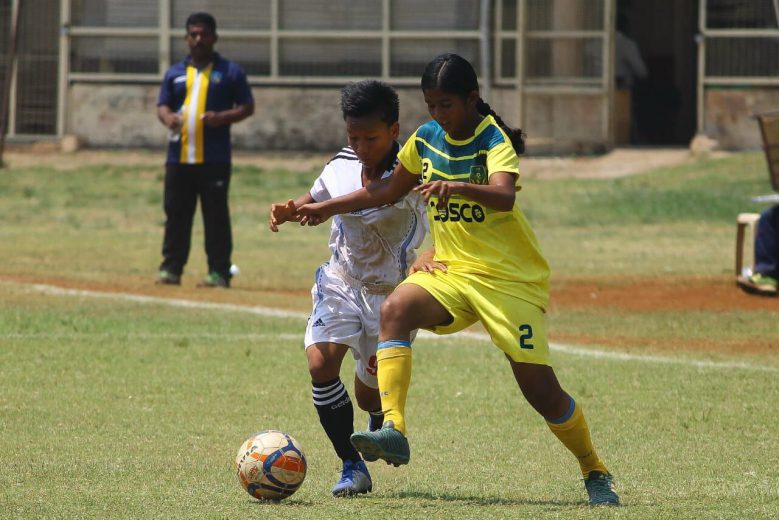 KOLHAPUR, 25th April, 2019 : The final round of fixtures in the group stages of the Hero Junior Girls’ National Football Championships 2019-20 came to a close on Thursday (April 25, 2019), with Gujarat and Mizoram becoming the last two teams to book their place in the quarterfinals, which are now set to begin tomorrow (Friday).

Chhattisgarh exited the tournament with three points in their account as they got the better of Pondicherry in the last Group E match. Laxmi Mandavi grabbed a hattrick (32′, 43′, 77′) while Priyanka Kashyap (22′, 62′), Gunjan Gwal (21′) and Reet Kashyap (54′) also found the back of the net.

Gujarat entered the last eight after getting the desired result against Telangana in a thrilling encounter. The team headed into the match knowing that they had to win by three goals or more, having drawn 0-0 against Bihar, who sat on top with four points.

Alkaben Thakor and Aruna Chauhan scored in the 15th and 41st minutes for Gujarat as they went into the break two goals ahead. In the 62nd minute, the crucial goal came through Drishti Pant as Gujarat won 3-0 and went ahead of Bihar on goal difference.

With Himachal Pradesh already in the last eight from Group G, hosts Maharashtra ended their campaign with a 3-1 win over Chandigarh. Priyanka Sujeesh opened the scoring in the 21st minute while Sai Sankhe added a second with the last kick of the first half. After the break, Chandigarh bounced back as captain Antrika scored from the spot to reduce the gap but Sankhe scored her second goal of the game in the 68th minute to secure the three points for Maharashtra.

The stakes were high as Mizoram and Kerala faced off in a virtual playoff for a last eight spot and at the end of the 90 minutes, it was the side from the north-east that went through after a 4-2 win.

Mizoram started off at an electric pace, racking up four goals in the first half through a Lalrinmuani hattrick (20′, 23′, 37′) and an own goal from Soniya Jose in the 32nd minute. The Kerala side fought hard in the second half, halving the deficit through Sreelakshmi A (47′) and Arya Sree S (79′) but fell short in the end.

The quarterfinals get underway at the Polo Ground on Friday, with two blockbuster encounters lined up. Jharkhand and Manipur will cross swords in the first clash after flawless group stage campaigns, with the former scoring a whopping 31 unopposed goals in their two matches and Manipur grabbing 10 in three games.

The evening clash will see defending champions Tamil Nadu take on Haryana, who come into the match on the back of wins against Delhi (2-1) and Madhya Pradesh (5-0). Haryana, on the other hand, played thrice in the group stages – scoring a total of 20 goals and conceding none.

The fixtures for the quarterfinals are as follows: