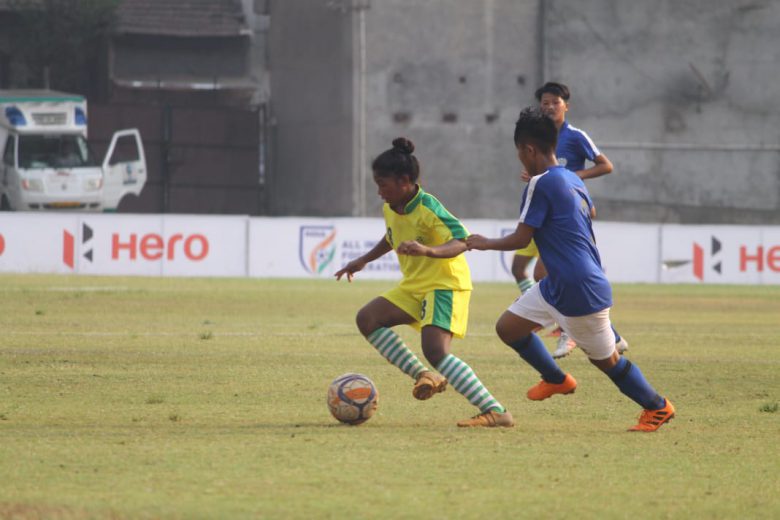 Jharkhand and Haryana made their way into the semifinals of the Hero Junior Girls’ National Football Championships 2019-20 with convincing wins over last year’s finalists Manipur and Tamil Nadu respectively at the Rajarshi Shahu Stadium in Kolhapur on Friday (26 April, 2019).

Sumati Kumar continued her free-scoring run, grabbing a brace in Jharkhand’s 4-0 triumph against Manipur while Haryana captain Raveena played a starring role in her team’s 4-0 win over Tamil Nadu.

Jharkhand, with 31 goals in 2 group stage continued their free goal scoring form as they opened the scoring in the very second minute. The fans were still settling into their seats as Kuwari Indwar brilliantly controlled a low cross from the left flank before shooting it past the opposing goalkeeper.

The goal opened up the game early on as end to end action began with Manipur fashioning chances through L. Kipgen and Shilky Devi midway through the first half but the Jharkhand keeper Sandhya Toppo was up to the task. Manipur continued their search for the equalizer but saw themselves fall further behind as Sumati Kumari scored her 14th goal of the campaign, in the 29th minute, captain Astam Oraon intercepted a ball in the middle before playing in Sumati, who slammed an unstoppable shot into the bottom corner. At the stroke of half time, Manipur were inches away from scoring but Priyangka Devi’s free-kick hit the crossbar and went out of play.

Three minutes into the second half, Oraon made it three for Jharkhand with a viciously swerving shot from long range that left the custodian with no chance. Manipur desperately searched for a foothold in the game but could not get past a resolute central defence duo of Saraswati Kri and Sudha Tirkey. In the 87th minute, Sumati put the final nail in the coffin with another composed finish as she rounded the keeper and slotted the ball home to complete a 4-0 win.

The 2nd quarter-final started of in a cagey note, however, in the 31st minute Haryana opened the scoring through winger Bali as a cross from the right wing sailed over the defenders and keeper to nestle into the back of the net. Minutes later, Haryana came close to doubling their lead as skipper Raveena fizzed in a delightful cross which evaded the onrushing strikers.

With the first half coming to a close, Tamil Nadu had two great chances to equalize but were denied at the last moment. In the 35th minute, Priyadharshini S jinked past two defenders and was set to shoot but was denied by a last-ditch sliding challenge. 10 minutes later, Mariyammal S whipped in a free-kick on target from the right but Haryana keeper Anshika dived across and pushed the ball onto the post before the defence scrambled it clear.

Haryana doubled their lead in the 49th minute with a classic set piece goal as Mamta headed the ball home first-time from a corner kick. They could have added a couple in the next six minutes as Raveena was denied in a one-on-one situation and then put her shot wide from eight yards out. However, she was not be denied in the 64th minute as she raced into the box from the right and placed the ball into the far corner to make it 3-0. In the first minute of added time, she completed her hat-trick with a deft finish – completing a fine win 4-0 for Haryana.

The third and fourth quarterfinals will be played on Saturday (April 27).