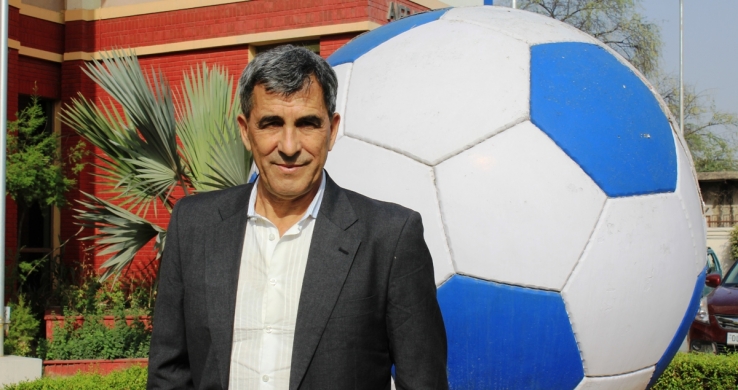 According to AIFF Technical Director Isac Doru, six players making their International debuts is a ‘major development in Indian football’.

Despite the Indian Men’s Senior National team kicking off their King’s Cup 2019 campaign with a 1-3 defeat against Curacao, the Blue Tigers received plaudits for their display, especially in the second half when they controlled the game, and created a number of chances against a tough opposition.

A major talking point emerging from the encounter was the handing of international debuts to as many as six players — Sahal Abdul Samad, Rahul Bheke, Brandon Fernandes, Amarjit Singh, Raynier Fernandes and Michael Soosairaj.

On the sidelines of the King’s Cup, Isac Doru said: “So many new debutants in a match is a major development in Indian football. We need to bring in new players who bring in new energy in the squad. The coach wants to see a lot of players, myself too.”

The Romanian, who was appointed in his latest role in April this year, added: “We need to create a family spirit in the team — among the older, younger and newer players. With six newcomers, it’s a very important thing and definitely, I think there will be more newcomers in the future.”

Doru also spoke about young players, and the importance of identifying talent as early as possible. “I’m sure we have the talent and potential in India but we need to discover such players at a younger stage. I recently saw the Hero Junior League and there were a few really talented players. It doesn’t matter if you are 15, 16 or 17. As long as you have the potential, you can play at a high level. We have to pay attention to such players and develop them,” he maintained.

Reflecting back on the Blue Tigers’ performance against Curacao, Doru praised them for the spirit in the second-half. “The first half left a lot to be desired. But in the second 45 minutes, the coach changed a few things and we started controlling the game, and had a lot of chances to score,” Doru expressed. “We saw two different performances in the two halves — as if we played with two different teams. In the second half, we had control and played attacking, which is very important.”

Speaking about India’s next match against hosts Thailand on Saturday (June 8, 2019), Doru said that he expects the Indian side to “go out and fight.”

“Thailand have some players who are very fast and technically sound. They will be fitter than us with the Thai league in the middle of the season. “However, what I am expecting to see is that we go out and fight. It doesn’t matter whether you lose the game but what matters is that you control it, and fight for every ball,” he explained.