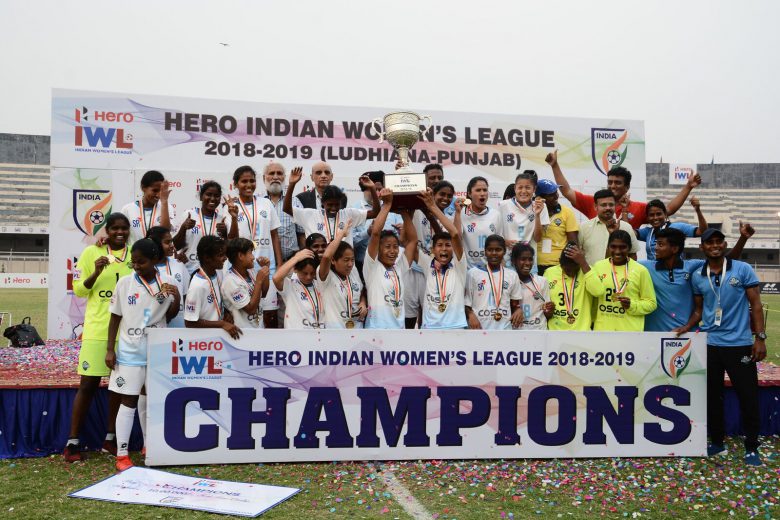 Sethu FC turned around a first-half deficit to beat Manipur Police SC 3-1 and win their first ever Hero Indian Women’s League trophy in the process, at the Guru Nanak Stadium.

Radharani Devi had put Manipur Police in the lead towards the end of the first half, but an own goal by Umapati Devi put Sethu back in the game, before their Nepal international Sabitra Bhandari turned up the heat to score two goals and win it for the Madurai-based side.

Sethu got off with the more chances in the first half, as they kept the Manipur attackers in check and built on their swift counter-attacks to move the ball up the pitch quickly. Their left winger Sandhiya looked lively in the opening exchanges, as she bombed down the left flank to give a lot of trouble to the Manipur defence.

The India international had the first clear chance a little after 10 minutes, when she received the ball just inside the box and pulled the trigger. However, she scuffed her instep shot and it lacked any sting. The winger had another good chance when she received the ball from a melee inside the Manipur box, but her shot rolled inches wide of the post.

Manipur’s Bala Devi was tightly marked, and she often had to drop to the midfield or to the right wing, in order to make some space for herself. Bala increasingly began to cut a rather frustrated figure, and was starting to resort to long-range efforts. Manipur’s goal came at just the right time, with a little over a minute of regulation time left for the first half, as Radharani leaped above the rest to nod in a corner from the left.

Sethu came out with more vigour in the second half, and got the goal that they were looking for, when Dangmei Grace broke down the right and sent in a low cross as captain Indumathi Kathiresan pulled the trigger. However, it took a deflection off Manipur Police defender Umapati Devi, who was unfortunately awarded the own goal.

It took the Madurai-based side around another five minutes to take the lead for the first time this game, as their mercurial Nepalese striker Sabitra Bhandari was set through on goal. the Sethu number nine rounded off the keeper, before slotting it into the net from an angle.

Sabitra, who was relatively quiet for most of the first half, came into her own after this goal that gave her the confidence. She scored her second of the evening, when Sandhiya broke swiftly down the left and played her in through the channel between the left back and the left centre-back. The Nepal international opened up her right foot and slotted it into the bottom corner to give Sethu the two-goal cushion.

From then on, it was a matter of seeing out the Manipur attacks, a responsibility that the likes of Sethu defenders Ashalata Devi and Sweety Devi, and midfielders Sumithra, Ratanbala and Indumathi carried out perfectly.

For line-ups, stats and pictures on this game, visit here—> Match Center

Most Valuable player of the tournament – Sandhiya (Sethu FC)