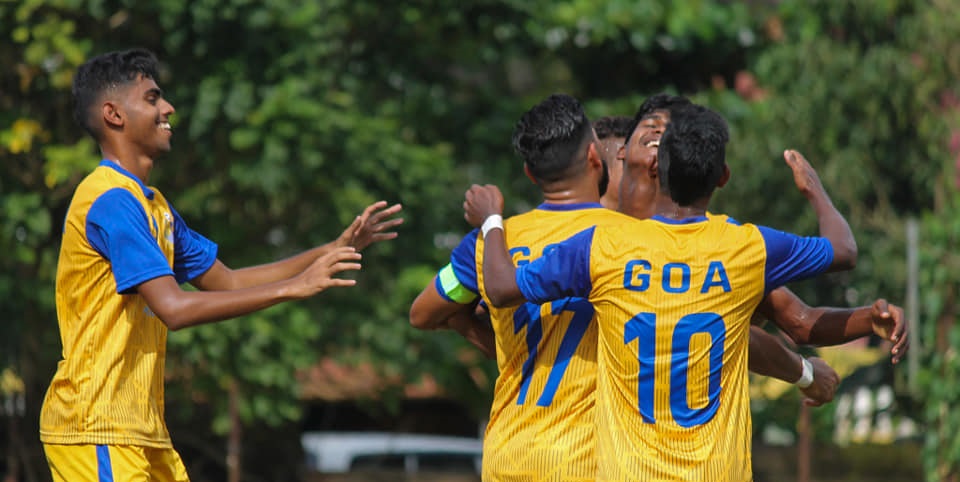 A late brace from Substitute Aaren Silva along with a goal each from Devendra Murgaokar, Samiel Costa, Joaquim Abranches, Lesley Rebello, Stendly Fernandes gave host a thumping 7-1 win over Madha Pradesh. Meanwhile a late surge in attack saw Rajasthan pump in four goals in the span of 16 minutes to down Dadra & Nagar Haveli.

Goa started off aggressively in search of goals and were immediately rewarded in the 10th minute when a corner from Ribhav found Lesly Rebello free of his marker to slot home the opening goal. Devendra Murgaonkar doubled the lead with a simple tap-in in the 21st minute after Chaitan’s initial effort was saved by Madhya Pradesh Fayiz. Substitute Stendly made it 3-0 minutes before the break, after Joaquim played him through.

Second half began with Goa continue from where they left as Samuel Costa scored with a sublime right foot shot from a distance to make it 4-0. Against the run of play, Goa conceded their first goal of the game when Sahil Rajak capitalized on a defensive mix-up to pull one back for his side. Three minutes later, Goa skipper Joaquim Abranches restored the four goal lead after his shot brushed the keeper’s hand to nestle into the Goal.

In the final ten minutes, Goa were rewarded with a penalty when Aaron Silva was pulled in the box and the lad himself stepped over to score the sixth goal before completing his brace few minutes later through a Devendra Murgaonkar’s assist.

In the second game of the day, Rajasthan kept their qualification chances alive with a comfortable 4-0 drubbing of Dadra & Nagar Haveli. However, it was not until the final 15 minutes that the game picked up pace. Jayesh Kumar, Gajendra Meena, Trilok Singh and Sanjay Lamba scored one each final 15 minutes to help their side grab all three points from the game.

Two Weeks Long Football Festival for Girls was the biggest positive at Pasighat, Arunachal Pradesh
Goalster FC to host a seminar on How To Balance Studies and Football