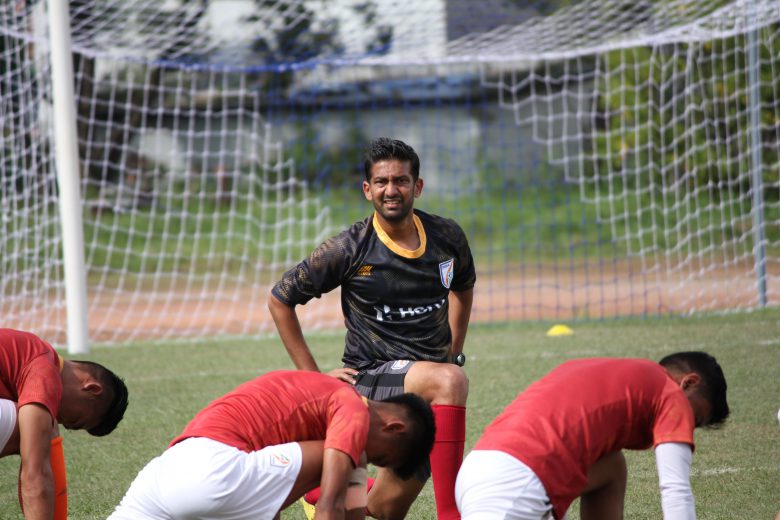 After their last encounter against Bangladesh where the team failed to break the deadlock and concluded on equal terms, India U-18 Head Coach Floyd Pinto admitted that his team “need to step up their game”

India U18s is set to take on Sri Lanka in their last group game fixture, where a draw is a minimum requisite to qualify for the semi-finals of the SAFF U-18 Championships.

Recalling the unnecessary ball holding and mistakes committed on the pitch, the coach quipped “Looking back at our last match, we are not happy the manner we kept the ball. We have been working a lot on keeping the ball and constructing attacks. We need to show confidence against oppositions who defend deeper, and need to have the confidence to play the ball much better,”

But before the team takes on to the field tomorrow, Floyd seems optimistic. “I am sure the boys will improve against Sri Lanka. They are capable of playing much better football. We need to create chances and get the goals. The goals are crucial in our quest to qualify for the semis. We aim to score as many as possible, and proceed to the semis as group winners,” he explained.
Last day, Sri Lanka fumbled against Bangladesh as they succumbed to a 0-3 loss.

However, a piece of positive news on the paper for the men in blue ensures that shot-stopper Prabshukhan Singh Gill is stable. He had to be stretchered early in the first-half against Bangladesh and got hospitalised due to a “nasty head injury”.
“All the reports are normal. But as it’s a head injury, we need to keep him under our observation for the next 48 hours. We look forward to him playing a part in the later stages of the Championship,” the coach informed.

Floyd who had a look at Sri Lanka in their match against Bangladesh from the stands commented that the islanders “played a good game of football.” “They tried to keep the ball, much unlike the opposition who preferred to kick it long. They were down by an early goal, and had their chances and should have pulled it back post the half-time,” he felt. “They created chances. They have some good dribblers and nippy players. We cannot ever take them lightly.” “At the same time, if we can keep better possession of the ball, and construct attacks the manner we have been planning to, we can nullify them.”

The match against Sri Lanka is slated to kick-off tomorrow (September 25) at IST 2.45 pm and will be live-streamed on MyCujoo.