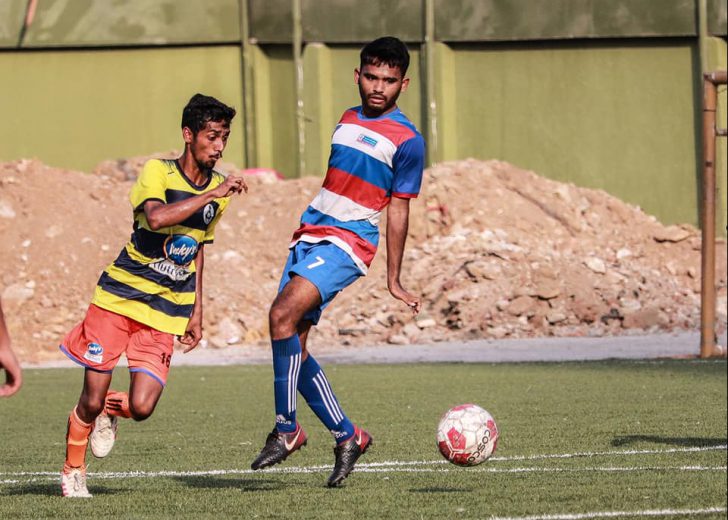 For the first time in two decades, Mumbai Customs have managed to reach the finals of Mumbai Football’s top division

In the first semi-final of MDFA Elite Division, Mumbai Customs faced off against CBI at the cooperage ground, Mumbai on May 1.

The game began with some cagey football as both side put caution ahead of attacks. As the game progressed, neither side seemed clinical enough to find the net, however in the dying minutes of first half. A corner from Praneel Mendon was smartly flicked from Monish Bhamre at the first post to set a shot for Rosenberg whose rebound was converted into a goal by Marc Dsouza.

While Customs attack’s probed and tested CBI, their defence was rock solid with some crucial and timely tackles by Monish Bhamre making life difficult for the CBI wingers, who were often found struggling to hold possession of the ball during their attacking forays. In the second half, Monish Bhamre was once again in the thick of things as his long run from the left flank, dribbling past two defenders, set up the second goal as the move led the ball to Gabriel Rosenberg who combined with Dhawal with some slick passing before the latter’s strike made it the second of the game

Custom’s back four of Pawan Negi, Sajjad Allam, Joshua Vesovkar and Monish Bhamre were like a wall in the defence intercepting every attempted through balls from CBI. For the third goal, a brilliant through pass from Monish Bhamre between the two defenders was well latched on to by Rosenberg who buried the ball to the back of the net to make it 3-0.

Well rounded players backed with systematic and smart coaching staff led by team coach Cedric Fernandez has helped Customs in their stellar run this season with just one game separating them from laying hands on the coveted title. The importance of treating injuries and player’s fitness has been a crucial part of the team strategies this season and the result seem to be showing.