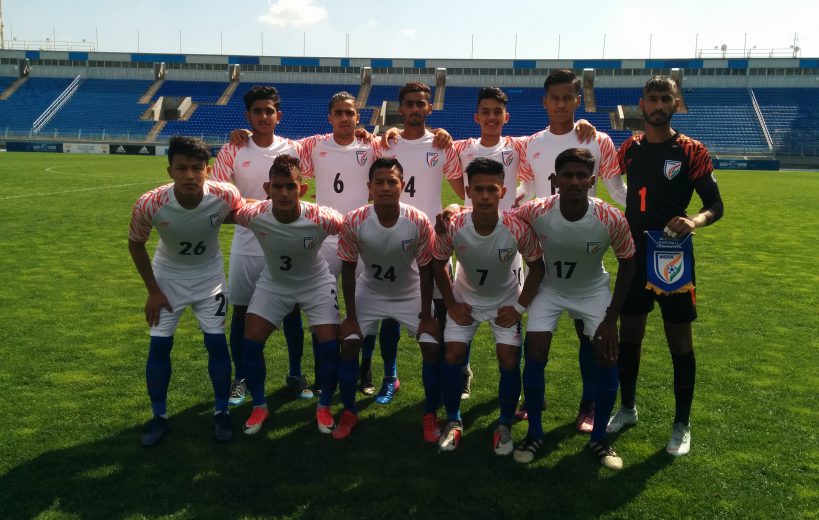 Despite dishing out a promising performance against Moldova, India U-19 National Team had to taste their second defeat in the ongoing XXXI Granatkin Memorial Tournament today.

Rohit Danu (34′) opened the scoring for India before conceding two quick goals in the second half from the Moldovans. Puscas Dan (54′) drew the parity for the European nation before Mihail Cioban (57′) converted the spot-kick to confirm their first win of the tournament.

Coach Floyd Pinto made a couple of changes in the starting line-up as he replaced Shabas Ahammed and Sanjeev Stalin with Robin Yadav and Vikram Partap Singh, respectively.

India showed their intent in the fourth minute when Jeakson Singh tried his luck from outside of the box, only to see his effort punched away by the opposition keeper. Within the next ten minutes, the another attempt by the midfielder flew over the crossbar.

The Indian colts were playing a more purposeful and creative brand of football today and eventually, in the 31st minute, Rohit Danu pulled the trigger to send the Indian dugout into delirium.

Givson Singh started the attacking move from the middle before passing it to Ninthoi. The winger, on a counter-attacking move through the right flank, put in a well-directed cross to Rohit Danu, who made no mistake as he nodded it past the Maldova keeper.

India were able to hold onto the slender lead at the end of the first half. After the resumption, Moldova tweaked their strategies and pushed India further to score the equaliser but the Indian defenders kept them at bay until the 54th minute, when Dan Puscas found the target from outside of the box.

Two minutes later, Robin Yadav pulled Cojocari down and the referee didn’t think twice, awarding a penalty in favour of the European outfit. Skipper Gaiu Valeriu put it past Prabhsukhan Gill to give Moldova the lead for the first time in the match.

In the 76th minute, following a harsh challenge on Gill, Moldovan defender Alexandre Vacarciuc got the marching orders. Although Indians had the numerical advantage, their counterparts hung on to the lead until the final whistle to leave the ground with all three points.

India will play their final match of the group stage against Bulgaria on Saturday (June 9, 2019).